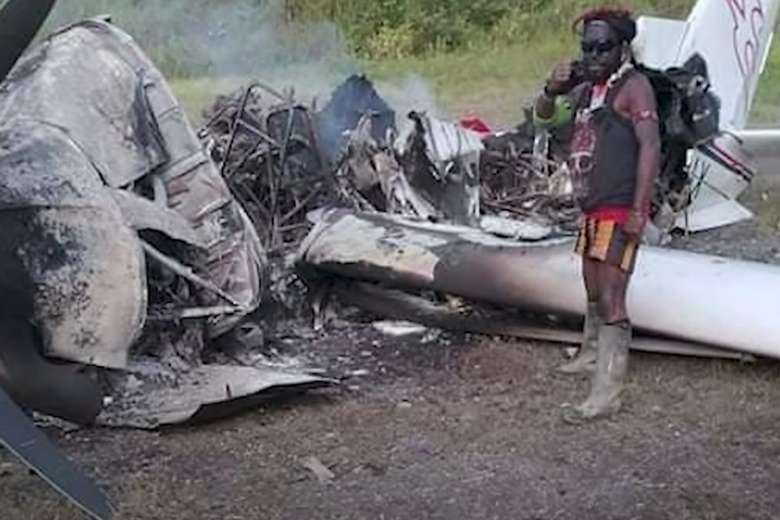 The burnt-out Mission Aviation Fellowship aircraft after it was attacked by members of the West Papua National Liberation Army on Jan. 6. (Photo: YouTube)

He and his two passengers were forced to abandon the plane that was carrying daily essentials including food. The goods were quickly unloaded before it was set on fire.

The attackers, members of the West Papua National Liberation Army, the armed wing of the separatist organization Organisasi Papua Merdeka (OPM) or Papua Independence Organization, let the pilot and two passengers flee to a nearby village.

MAF, an American-Christian humanitarian group, has been serving the hilly and rugged terrain of the conflict-stricken Papua and West Papua provinces of Indonesia since 1952.

It reaches isolated Papuans with Christ’s love by supporting churches and mission efforts, saving lives through medical evacuation flights, and creating access to community development projects, education and crisis relief. MAF missionary families, with the help of close to 80 Indonesian staff, operate and maintain 11 aircraft from five bases in Papua, according to its website.

Yet MAF has been accused by the mostly Christian insurgent group OPM of collaborating with Indonesian authorities and has come under deadly attacks.

In May 2020, MAF pilot Joyce Lin died after her plane crashed into a lake in Papua soon after she took off to deliver Covid-19 rapid test kits to a remote village in the Papuan highlands.

Investigations are still ongoing about the cause of the crash but rumors are rife that a suspected insurgent attack was behind the accident.

Following the burning of the plane on Jan. 6, an OPM spokesman accused MAF of carrying Indonesian spies, military and security personnel and accused missionaries of being agents of foreign capitalists.

"The missionaries are all agents of foreign capitalists who come as spies to destroy the natural forces of West Papua, and finally Indonesia and America are free to steal our natural wealth," OPM spokesman Sebby Sambon was quoted by the Aceh Tribune.

"Therefore, we will not compromise because the aircraft always carry Indonesian military and police troops, and we already know that.

"What is the pride of the missionaries? There is no benefit because God's people were killed by the Indonesian military. These Western missionaries never put pressure on their country."

The attack on the MAF plane and the statement of the OPM spokesman spell new dangers for the Catholic Church and Christian groups in the Christian-majority region of Indonesia that has been plagued by a pro-independence armed insurgency since the 1960s.

In recent times, the separatists have been targeting the Church and Christian interests, presumably to draw more attention from the West to the Papuan conflict.

In 2020, more than a dozen attacks on Christian interests were reported in the region. They included the killing of Reverend Yeremia Zanambani, 67, of the Gospel Tabernacle Church of Indonesia in a village in Intan Jaya district on Sept. 19. Both the separatists and Indonesian military blamed each other for the murder.

In other cases of violence, separatists killed motorcycle taxi drivers and security officers and opened fire on a commercial plane with civilians on board. They have also been accused of holding people hostage for ransom and rape.

This escalation in violence threatens the lives and livelihoods of ordinary Papuans who yearn for peaceful and dignified lives and neither endorse the separatists nor Indonesia’s political, military and economic clout.

It’s a tragic reality that Papua has rich mineral resources but is one of the poorest Indonesian regions in terms of the Human Development Index due to negligence and exploitation starting from Indonesian monarchies before Dutch colonization in the 16th century and Indonesian rule since 1969.

Many Papuans still grieve that they were not consulted when the Dutch transferred the territory to Indonesia through an American-brokered 1962 New York agreement. They continue to call the UN referendum of 1969 “a sham” as the Indonesian military appointed 1,025 so-called representatives who overwhelmingly voted to join Indonesia in what was called “the Act of Free Choice.”

Even in 2003, when Indonesia divided the province into three parts — Papua, West Papua and Central Irian Jaya — the authorities didn’t bother to consult the Papuan leadership, triggering further discontent.

As a largely Melanesian group who are socially and culturally distinct from the mostly Malay-origin ethnic groups of Indonesia, Papuans have every right to claim independence, but violence for the cause is condemnable.

Since the 1990s, Indonesia has made some concessions to Papuans by granting more autonomy. The initial enthusiasm soon died out and Papua continues to explode in violence as the root causes of the grievances have been never been properly addressed.

Papuan activists and rights groups have accused Indonesia of committing gross human rights violations since the 1960s, including destruction of villages and mass killings of villagers for supporting pro-independence separatists. Amnesty International recorded more than 69 unlawful killings in Papua from 2010 to 2018.

Moreover, little has been done to stop racism against Papuans in many parts of Indonesia.

Indonesia-backed multinationals like mining giant PT Freeport McMoRan have been accused of plundering natural resources and the environment, angering ethnic Papuans who have always considered the natural environment and forests as their scared communal territories.

The crisis also has an ethno-religious dimension. Ethnic Papuans, who are mostly Christian, allege that the state-sponsored migration of conservative Muslims from other parts of Indonesia is a grave threat and a ploy for cultural and religious hegemony. In places like Merauke, migrants now make up over 50 percent of the population. Moreover, local Muslims are blamed for supporting centralized Indonesian rule.

Christians — Protestants and Catholics — find themselves in a complex situation amid the tug of war between the separatists and Indonesian authorities. A significant number of Christians believe Papua has no future in the Indonesian system, while another group considers the region an integral part of Indonesia.

While some Christian groups including Catholic clergy openly call for Papua’s independence, the church hierarchy have been silent, although they deplore violence and demand justice for human rights violations.

Church leaders have failed to become a unifying force for Papuans and have not made concrete efforts to build peace by brokering any official or unofficial deal between the feuding parties.

Some leaders of the Catholic Church have been seen as apologists for Indonesia who advocate a “100 percent Catholic and 100 percent Indonesian” approach, which means they believe Papua is part of Indonesia.

It seems both political and religious leaders are turning a blind eye to the escalating tensions and violence in Papua that can only get worse without any active engagement and redress of grievances.

The burning of the MAF plane is just another sign of how the conflict in Papua poses grave threats to anyone connected with the region. There is every reason to fear that the yoke of violence and bloodletting in Papua will continue to get heavier.

Rock Ronald Rozario is a journalist and commentator for UCA News based in Dhaka, the capital of Bangladesh.The views expressed in this article are those of the author and do not necessarily reflect the official editorial position of UCA News.