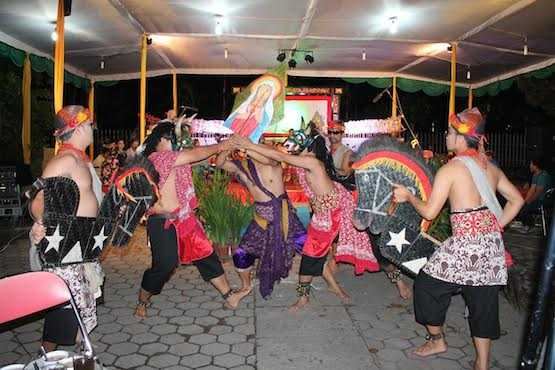 Seminarians put on a show depicting the life of St. Paul, the seminary's patron saint, under the guidance of puppet master Father Agustinus Handi Setyanto (Photo by Bernard D. Elwin)

Hundreds of Indonesian Catholics celebrated the 80th anniversary of the country's oldest seminary on Aug. 13 in Kentungan, Yogyakarta.

The St. Paul Major Seminary was founded by Jesuit Bishop Petrus Johannes Willekens on Aug. 15 1936, and has produced about 600 priests, 14 bishops and 2 cardinals.

Jesuit Cardinal Julius Darmaatmaja, retired Jakarta archbishop, said during the celebration that the seminary was founded with a mission to build a church rooted in Indonesian culture

"Bishop Willekens dreams of a Catholic Church that is purely Indonesian, not a church in Indonesia," Cardinal Darmaatmaja said.

"To achieve such a dream, there is need for local priests. That is why he built this seminary," he said.

Cardinal Darmaatmaja also told seminarians and priests to have the courage to leave behind all worldly comforts.

"As priests, be brave to say enough [to hedonism] and live a simple life style," he said.

Seminary rector Father Joseph Kristanto said the institution has also educated thousands of lay people — former seminarians and priests — many of whom have become good leaders in society.

According to Father Kristanto, over the last eighty years, the seminary has moved to eight different locations.

It was founded in Muntilan, the birthplace of Catholicism in Java Island, and then several other places before moving to its current location in Kentungan in January 1968.

In the beginning, St. Paul Seminary — which comes under Semarang Archdiocese — aimed to train priests for 13 dioceses in Java and Sumatra.

It has also trained seminarians of other religious congregation, he said.

During the celebration, Father Agustinus Handi Setyanto, a puppeteer, performed a shadow puppet show that depicted the life of St. Paul, the patron saint of the seminary.

"I hope the seminarians studying at St. Paul seminary will have the enthusiasm to preach the Good News as St. Paul did," he said.