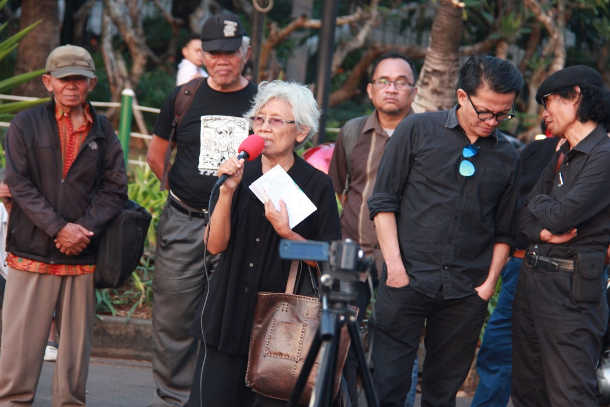 Maria Catharina Sumarsih, the coordinator of a group of human rights abuse victims, speaks about unsettled abuse cases during a protest held every Thursday outside the presidential palace. (Photo by Konradus Epa/ucanews)

Indonesian rights groups and victims of alleged abuses have condemned a claim by the country’s attorney-general that two Jakarta massacres committed soon after former dictator Suharto was toppled from power were not human rights violations.

The Semanggi tragedies, as they became known, saw security forces shoot dead 29 people as millions took to the streets of Jakarta and other cities following the end of Suharto’s more than 30-year rule in 1998.

He was explaining why these cases had not been settled, adding that an ad hoc human rights court had not been established because evidence was inadequate.

Maria Catharina Sumarsih, a human rights activist and mother of a student killed in the first Semanggi tragedy, accused the attorney-general of following in the footsteps of his predecessors in denying and whitewashing events.

She said Burhanuddin simply did not want to investigate the massacres, despite the National Human Rights Commission (Komnas HAM) having submitted evidence.

“There is strong resistance among politicians against pursuing these student shootings,” Sumarsih, who is also coordinator of a group of human rights violation victims, told UCA News.

“If the president [Joko Widodo] is looking to settle cases like these, he must order the attorney-general to follow up the investigation of the rights commission," she said.

“We waiting for official clarification from the Attorney-General’s office about its stance on this matter,” he said.

He said the attorney-general should not be making such statements to parliamentarians without having seen all the facts.

“If he saying there was insufficient evidence, the attorney-general should use the evidence filed by Komnas HAM,” he said.

He said several military and police officers had been tried for the deaths, but this did not go far enough because whoever ordered the shootings has been allowed to remain free, he added.