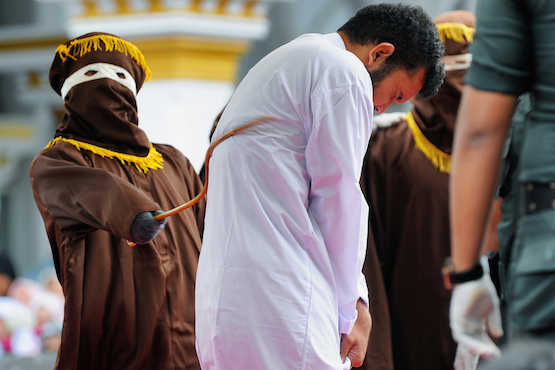 An Indonesian man is caned in Banda Aceh for having gay sex in this May 23, 2017 file photo. Homosexuality is outlawed in conservative Aceh province under Sharia law, but legislators in Jakarta want to outlaw it across the country, according the House speaker Bambang Sesatyo. (Photo by Chaideer Mahyuddin/AFP)

Most Indonesian lawmakers wants to criminalize homosexuality, according to a leading member of the country's parliament.

Currently, homosexuality is only outlawed in Aceh province, which follows Sharia law.

"All same-sex sexual relationships must be punished," Sesatyo said.

"A majority of those in political parties in the House and the government agree with this. It's only a matter of time when a law will be passed," he said, adding that legislators would want to make homosexual relations punishable by up to nine years in prison.

His comments follow a Constitutional Court ruling in December rejecting a petition by hard-line groups seeking to outlaw homosexuality.

The court said outlawing gay sex was a matter for lawmakers to decide.

"How [can you] prosecute gay adults who engage in intimate acts on the basis of loving each other?" said Hartoyo head of a LGBT advocacy group called Suara Kita.

"There is no reasonable basis for refusing such relationships," said Hartoyo, who like many Indonesians goes by only one name.

Franciscan Father Peter C Aman, a moral theology professor at the Driyarkara School of Philosophy in Jakarta said although same-sex intercourse is forbidden by religion, it cannot be a reason for the state to impose legal sanctions against it.

"Sexuality exists in the private sphere associated with morality and will. [Same-sex intercourse] is a sin, but it is not for the state to look after people's sins," he told ucanews.com.

"The state should only step in if there are adverse effects on others, such as coercion, rape and other crimes," he added.

According to Andreas Harsono, Indonesia researcher at Human Rights Watch, said lawmakers are bending to the will of religious extremists.

"Whenever Indonesian LGBTs need protection and public support, the government shows its fears in the face of militant Islamists," he said.

The government and political parties must dare to say that sexuality is a private matter, he said.