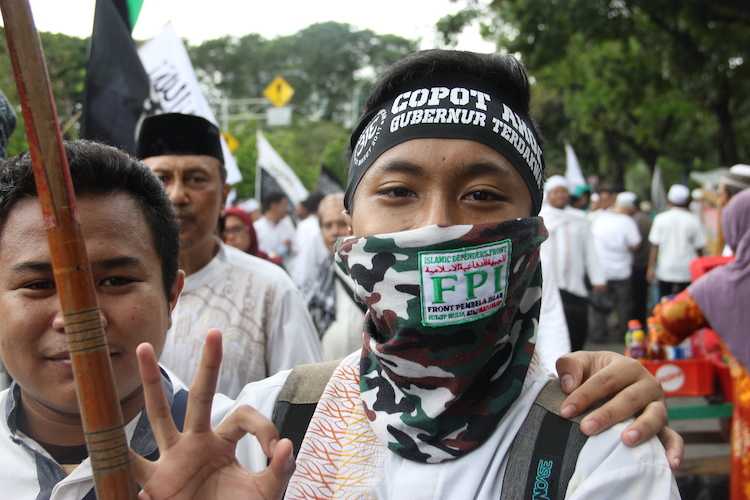 Members of the Islamic Defenders Front (FPI) stage a rally in this March 31, 2017 photo, in Jakarta to protest against Basuki Tjahaja Purnama, popularly known as Ahok. (Photo by Ryan Dagur/ucanews.com)

Ahmad Fauzi was among hundreds of thousands of Muslims who decided to join a series of rallies calling for the imprisonment of Jakarta's Christian governor Basuki "Ahok" Tjahaja Purnama on blasphemy charges.

The effort was ultimately successful: Ahok lost his bid for re-election and was jailed for two years.

Now Fauzi is waiting to see what will happen in the lead-up to next year's presidential election as hard-line supporters of various candidates aim to make sure their voices are heard.

"In principle I support candidates who are willing to practice Islamic law and fight against those who are against Islam," said the 24-year-old, who lives in Tangerang, about 40 kilometers south of Jakarta.

He is a member of the Islamic Defenders Front (FPI). This posits the "enemy" as incumbent President Jokowo Widodo, who will certainly run again and remains far ahead in a number of opinion polls.

"He is a Muslim but he is Ahok's ally and supports the criminalization of the ulemas," he said, referring to Muslim scholars like Habib Rizieq Shihab.

Habib, a patron of the FPI, is one of many ulemas the government has targeted. He is now living as a fugitive in Saudi Arabia.

Hard-line Muslim groups have taken heart from their success in raising religious sentiment to help secure victory in the last Jakarta gubernatorial election.

Now they take this as a reference point as they make moves to win seats for their favored candidates, analysts say.

Such a strategy is likely to be deployed again for the presidential election, especially by Widodo's rivals.

One of these is Prabowo Subianto, a retired general who struck alliances with Muslim groups ahead of the Jakarta election to notch a win for Muslim candidate Anies Rasyid Baswedan.

Yet just how much influence these hard-line groups will wield in the next election remains to be seen after they suffered from internal disputes leading some to splinter off.

In its report "After Ahok: The Islamist Agenda in Indonesia," released on April 12, the Institute for Policy Analysis of Conflict (IPAC) states that their success in helping to defeat Ahok has given them something of a reputation.

"[It] has left many politicians convinced that they need conservative Muslim support to win elections, and it has convinced many Islamists that they can achieve their social and political goals by working through Indonesia's democratic system."

However, the report argues it will be difficult to repeat that success in a presidential election because the leaders of these groups are not united. Moreover Rizieq , a charismatic figure known as a galvanizing force, has now departed, leaving big shoes to fill.

It was easier for them to take down Ahok because he was a non-Muslim and his actions could be portrayed as an assault on Islam, the report added.

Other respected Islamic scholars across Jakarta told voters they were duty-bound to vote for the Muslim candidate.

"It will be harder to use the same tactics against Jokowi in 2019," the report stated.

"The president is Muslim. He is popular. He has the support of Nahdlatul Ulama [a traditionalist Sunni Muslim movement] and he has brought the MUI [Indonesia Muslim Council] to his side," it added.

Despite such doubts, FPI spokesman Slamet Maarif countered recently that "we can do anything." He promised the group would continue its struggle to pass its agenda of having Islamic law applied across a unified Indonesian republic.

"Nothing is impossible. Did you see what happened in the Jakarta election? Ahok initially took the lead in opinion polls but we successfully overturned that," he said.

"Now there is a real possibility the different Muslim groups could unite," he added.

"We share a common mission and believe the same steps should be carried out, so we are just waiting for the right moment."

He said the FPI had not been daunted by the loss of their charismatic figurehead. Even though Rizieq is stuck in Saudi Arabia, "that does not mean we are weak," he said.

"He is still our leader and we follow his direction in supporting the parties that are against Ahok."

Many Muslim leaders still attack Widodo during their sermons at mosques and the #2009GantiPresiden movement, which calls to have him removed next year, continues to gain strength.

In one sermon delivered in Jakarta on April 13, Amien Rais, an Islamic scholar who claimed to be Rizieq's representative, launched into a tirade against Widodo and said he was anti-Islam.

"How happy we are that next year, our president will be replaced," he said, calling on Muslims to not shy away from a fight and "have no fear."

Those listening at the mosque also declared their loyalty to both Rizied and Rais.

Meanwhile, the former chairman of Muhammadiyah, the second-largest Islamic organization in the country, labeled the political party which opposes Widodo as hizbullah (the party of God).

Boni Hargens, a political analyst, said the attacks that played on religious sentiment were being recycled because it was hard to find another legitimate reason to attack Widodo.

The president has made improvements in education and health care, not to mention winning the support of Muslim clerics.

However, the fact that these groups are able to operate in this way highlights the decline of democracy in Indonesia, he said.

"Democracy does allow anyone to delegitimize opponents. If they challenge them it must be done in a legitimate way, not based on unfounded accusations," he said.

Critics say some religious and political leaders are trying to convert Muslims who are not politically literate in order to exploit them for their own interests.

"They were herded to be soldiers on the front lines of a battle, but the rewards go to the religious and political elites," he added.