Church workers, local people and NGOs all side with the European Union's analysis that palm plantations hurt the environment This file photo from East Kotawaringin district in Central Kalimantan province on Indonesia's Borneo island, shows a palm oil plantation located in the concession of Karya Makmur Abadi that environmental groups say have let to the destruction of  Indonesian rainforests. (Photo by Bay Ismoyo/AFP)

Indonesian authorities have denied accusations that a massive expansion of the palm oil sector has caused environmental damage and social conflicts, angering church officials in areas affected by the plantations.

Indonesian Ambassador to Belgium, Luxembourg and the European Union, Yuri O. Thamrin said on March 25 the European Parliament's Report on Palm Oil and Deforestation of Rainforests was a mistake "because palm oil is not the main cause of deforestation."

Yanto Santosa, forest expert and lecturer at Bogor Agricultural University in West Java, agreed. "The vote of the European Parliament that palm oil has caused deforestation is not true," he said.

"Many palm plantation areas in Indonesia were not converted from forests but were local people’s land and thickets," he said, quoted by Berita Satu, an Indonesian news outlet.

"The presence of palm companies has caused conflicts between local people and the companies, among local people, and between workers and companies," Father Amo told ucanews.com on March 25.

"Palm oil plantations have also decreased the income of local indigenous people who depend the forests and land," he added.

Since 2008, the Catholic Church, particularly in Merauke Archdiocese, has provided advocacy to the people to avoid violence and negotiated with local authorities to lessen the negative impact of palm plantation expansion. 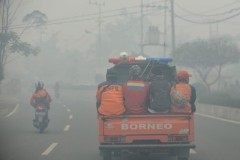 "The church also urged companies to act fairly, not agitate local people and care for the environment," he said.

Inda Fatinaware, executive director of Sawit Watch, a non-governmental organization that monitors the impacts of palm oil plantation, said in a statement that violations happen.

For instance, she said, conflicts began to erupt when palm oil companies came into the forest and began to displace the Suku Anak Dalam community in Jambi, Sumatra, and disturb another community in Kota Waringin, Kalimantan.

"Land grabbing, deforestation, intimidation, criminalization of local people is an uncontested fact in this sector," she said.

Albert Willy, a farmer from the Dayak tribe in Central Kalimantan province said since the plantation came to his region people’s lives have changed.

"Protected forest in our area has gone it has all been converted to palm plantations," said Willy.

"We were never asked about it and some companies do not even have permits," he added.