Adulterers would also be caned under the sharia-influenced bylaw 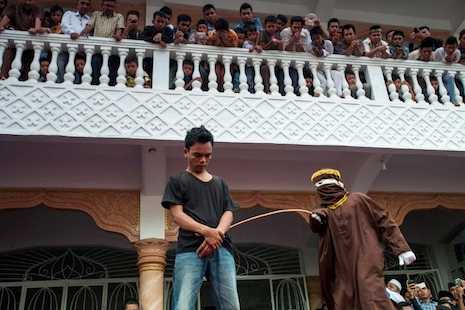 A masked, hooded official canes an Acehnese man for gambling in Banda Aceh on Friday. Under a proposed draft bylaw, gay sex and adultery would be punishable by 100 cane lashes. (AFP Photo/Chaideer Mahyuddin)

Gay sex could be punishable by 100 lashes of the cane in Indonesia's staunchly conservative Aceh province if parliament passes a draft law that critics say violates basic human rights.

Aceh is the only part of the world's biggest Muslim-majority nation to enforce Islamic sharia law and has been slowly implementing it since 2001, when it gained some powers of autonomy.

The bylaw also punishes adultery with 100 lashes of the cane.

The bylaw reinforces previous sharia legislation that bans alcohol consumption, gambling, fraternizing between unmarried men and women, and physical displays of affection outside of marriage, such as touching and kissing.

Canings in Aceh are often carried out with a long thin rattan stick and are aimed at humiliating, rather than causing pain. The bylaw allows for fines paid in gold or jail time as an alternative to the lashes.

Eight men on Friday were caned for gambling in the provincial capital, Banda Aceh, as around 1,000 watched, some filming and cheering.

The draft is a watered-down version of a bylaw that prompted international outrage when it was passed by Aceh's parliament in 2009 as it included stoning to death as punishment for adultery. It was later overturned by the provincial governor.

Aceh Party's Ramli Sulaiman, who heads the commission that drafted the law, said the majority of members in the parliament appeared to support the draft and that it could be passed as early as Monday.

"We have studied the implementation of sharia in countries like Saudi Arabia, Brunei Darussalam and Jordan to draft this law and we are happy with it," he said.

But the director general of regional autonomy at the ministry of home affairs, Djohermansyah Djohan, said earlier that his department could shoot the law down if it violated human rights.

Amnesty International has expressed concern over the bylaw and has called for an end to caning in Aceh, saying it goes against international laws on torture and rights, as well as Indonesia's own constitution.

The province, which is often referred to as the veranda of Mecca, gained special autonomy in a pact with Jakarta aimed at quelling a decades-long separatist movement.

Indonesia has the world's biggest Muslim population, but the vast majority practice a moderate form of the faith. AFP