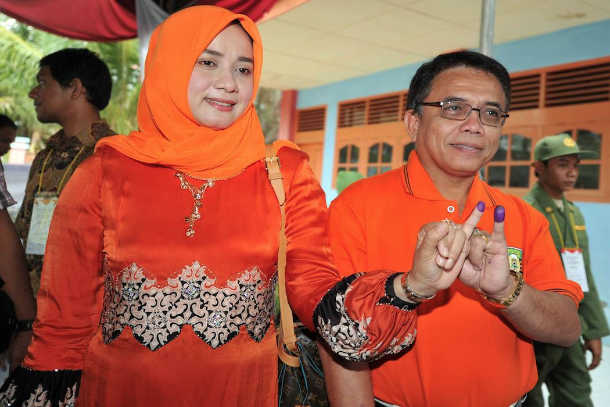 Aceh's governor Irwandi Yusuf (right) and his wife Darwati A. Gani show their fingers marked after voting in the province's second election in Banda Aceh in this April 9, 2012 file photo. (Photo by Adek Berry/AFP)

Lawmakers in Indonesia's Aceh province have vowed to consider cutting off the hands of those convicted of corruption, in response to a public outcry following the arrest of Governor Irwandi Yusuf.

Yusuf was arrested on July 3 on suspicion of misusing special autonomy funds after he allegedly received 500 million rupiah (US$34,488) from a district head. Two businessmen that police suspect handed over the bribe were also detained in Jakarta.

Aceh is the only province in Indonesia that implements parts of Islamic Shariah, which includes highly-criticized public caning for homosexuality, adultery, sexual assault, rape, gambling and selling alcohol. More than 95 percent of its population is Muslim.

Yusuf's arrest has sparked a furor among activists and citizens calling for the Islamic criminal code — known as qanun — to be implemented against convicted officials for crimes such as graft.

Acehnese have taken to social media and held a series of public rallies, including on July 24 outside the local assembly office and the governor's office, calling on lawmakers to immediately propose such a qanun.

Asrizal Asnawi, a legislator, said they would consider the proposal, as "this demand has also been voiced by people from various circles for a long time."

"If it is really the people's aspiration and the will that comes from the grassroots, it feels right and needs to be seriously considered by parliament," he said on July 25, according to news portal detik.com.

He said Aceh's assembly has not yet seriously discussed the qanun because there are already official institutions that handle corruption, such as police, prosecutors and the Corruption Eradication Commission.

Fellow lawmaker Ghufran Zainal Abidin said he would raise the issue at a plenary meeting.

With its status as a special autonomous region as part of a 2005 agreement with Jakarta to end a three-decade struggle for independence, Aceh received an injection of funds amounting to US$3.9 billion between 2008 and 2017.

However, activists claim corruption is rampant in the province.

Last year, local NGO Aceh Transparency Society (MaTA) reported the misappropriation of US$45.2 million that the government spawned for ex-combatants, but the issue remains unresolved.

In a region where graft often goes unpunished, the arrest of Governor Yusuf by the Corruption Eradication Commission was welcome news, according to MaTA coordinator Alfian.

"Almost every corruption case never gets processed, especially if it involves high-ranking officials," he told ucanews.com.

"We have waited for a long time for the commission, which we recognize as independent, to pay attention to this region."

Last year, 67 corruption cases were reported to the Aceh courts, up from 51 cases in 2016.

Hayatuddin Tanjung, of the Anti-Corruption Movement (Gerak), described the province's corruption as "propagating, structured and systemized".

"It has threatened the rights of Acehnese to enjoy development, wealth, and proper public services," he said.

Of the 5 million population, almost 16 percent are poor, according to state agency data, which ranked Aceh the sixth poorest out of 34 provinces.

In this climate, the call for amputation as punishment appears to be resonating with some ordinary citizens. Zulfan Alfian, a driver in Banda Aceh, agreed Shariah should be applied for the crime of graft, because "its impact harms the public".