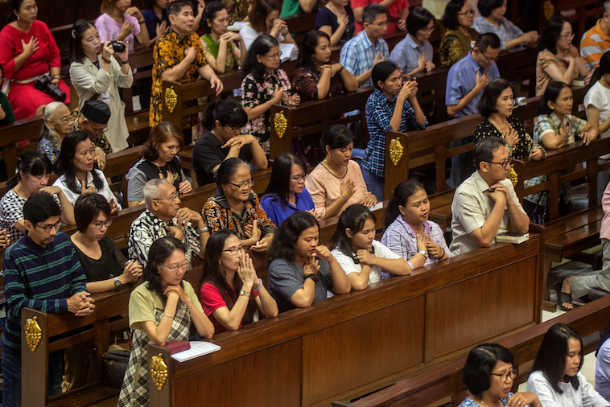 People attend a memorial service at the Santa Maria Catholic Church in Surabaya on May 13 to remember the victims of suicide bombings carried out by an Islamic State-inspired family. On May 13, 2018, a family of six — including two girls aged nine and 12 — blew themselves up at church and two other churches in Surabaya during Sunday morning services, killing over a dozen congregants and wounding scores more.
(Photo by Juni Kriswanto/AFP)

Christians and Muslims in Indonesia’s second-largest city of Surabaya called for peace on May 13 as they marked the first anniversary of church bombings that killed 19 people.

They made the call during an inter-faith memorial service at the Santa Maria Immaculata Parish Church, one of three churches where suicide bombers blew themselves up last year while Catholics celebrated Mass.

Fransiskus Xaverius Ping Tedja, a member of the Santa Maria Parish council, told ucanews.com that the gathering was an opportunity for the inter-faith group to pray together and reflect on last year’s tragedy.

"We also provided iftar [a fast-breaking meal] for our Muslim brothers and sisters who joined us," he said.

Victims’ families and survivors, including a Muslim policeman who sustained permanent eye damage in one blast, also attended the gathering.

Father Agustinus Tri Budi Utomo who led the Mass said the gathering was also an opportunity to embrace survivors.

"We accompany you, the families of the victims. What you feel is what we feel,” he said.

They also prayed for victims of the church bombings in Sri Lanka, as well as the Christchurch mosque shootings in New Zealand.

Aan Anshori, coordinator of the Anti-Discrimination Islamic Network, said the event provided momentum to call on people to respect diversity and avoid exclusivism.

"The grief of our Christian friends is the grief of the entire nation, including Muslims. Such an attack should not happen again,” he said.

Meanwhile, during a commemoration ceremony held by the government on May 14, Surabaya Mayor Tri Rismaharini invited all elements of society to be vigilant and make Surabaya a safe and comfortable city for all people again.

"Let's take care of Surabaya and making it a safe and peaceful city for all its citizens,” she said.

On May 13 last year a wave of suicide bombings at Santa Maria Church and two Protestant churches in Surabaya, killed 19 people and injured dozens of others.

The attacks were carried out by members of a single family — including young children — with links to the Islamic State group.

Another attack on the city police headquarters, the following day by another family left at least four dead and 10 injured.