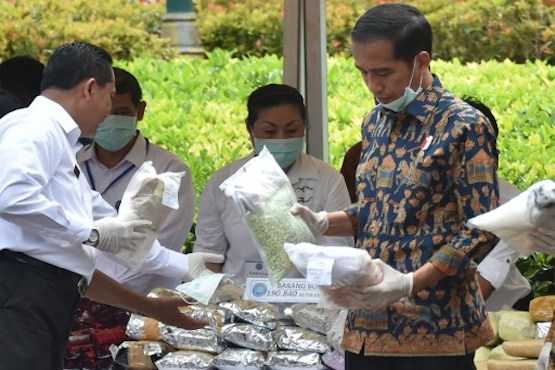 Indonesian President Joko Widowo (right) looks at seized drugs before they are destroyed in Jakarta in this Dec. 6, 2016 photo. (Photo by Bay Ismoyo/AFP)

Church officials and rights activists believe Indonesia could be heading down the same path as the Philippines after the head of the country's anti-narcotics agency recently issued a statement encouraging the shooting of drug traffickers trying to evade arrest.

They pointed to an incident on Feb. 3 when National Narcotics Agency officers shot dead an unarmed Malaysian national as he tried to flee during a drug-smuggling bust in Jakarta.

The man allegedly tried to smuggle around 14 kilograms of crystal methamphetamine into Indonesia by boat.

That same month President Joko Widodo claimed that 15,000 people die every year because of drugs, and called on the agency to increase its efforts to crack down on the drugs trade.

Widodo promised to come down hard on drugs and vowed to execute all drug traffickers when coming to power in Oct. 2014.

The church and rights activists have likened the rhetoric to that of Philippine President Rodrigo Duterte and his war on drugs.

At least, 7,000 people have been killed in incidents linked to Manila's anti-drug campaign, according to rights groups.

Azas Tigor Nainggolan, coordinator of the law and human rights division of the Indonesian Bishops' Commission for Justice and Peace, called the National Narcotics Agency chief's comments as incitement to "murder."

"It is more cruel than the death penalty because criminals will be killed before they have a chance to be brought to court," he told ucanews.com on Feb. 7.

Such a policy, he added, is against a person's right to life, which cannot be taken away by anyone including the state and law enforcement officers.

Natalius Pigai from the National Commission on Human Rights said law enforcement officers should question such comments from their leaders if they appear to contravene the law.

"Do things according to the law otherwise it is abuse of power," he said.