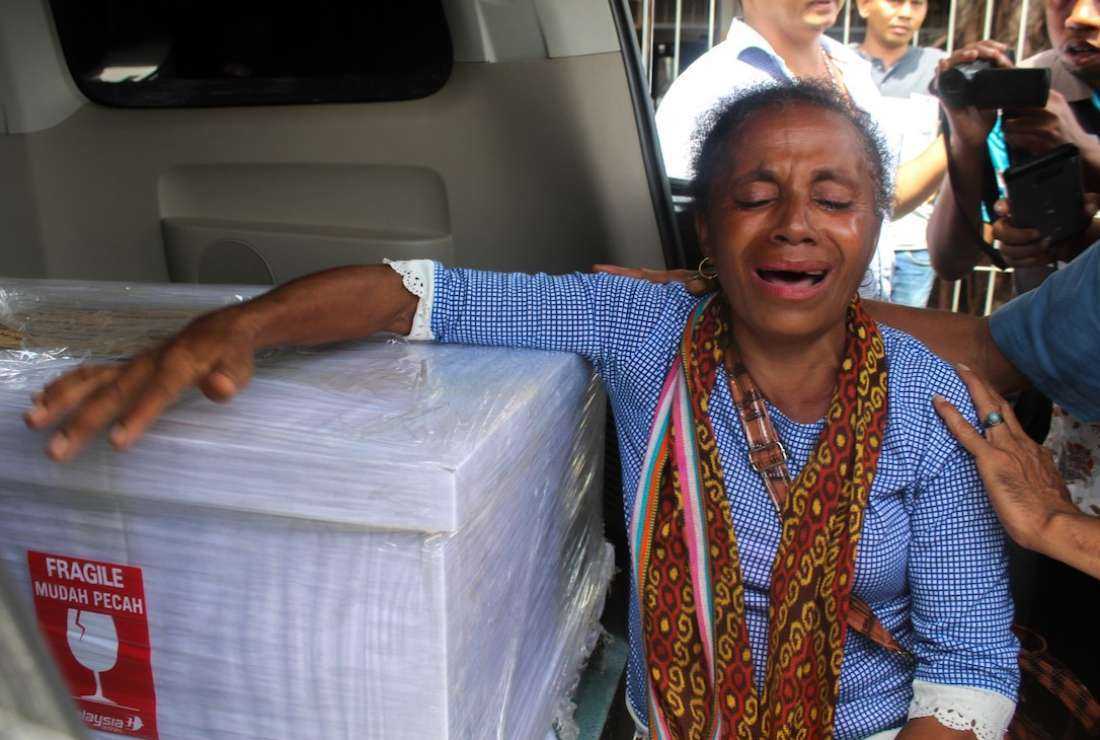 Petronela Koa cries next to the coffin containing her niece, Adelina Sau, a domestic helper who died in Malaysia, during its arrival at Kupang airport in East Nusa Tenggara on Feb. 17, 2018. (Photo: AFP)

Indonesian anti-human trafficking activists have attacked a decision by Malaysia's top court to uphold the acquittal of a 62-year-old housewife accused of murdering her Indonesian maid four years ago.

On June 23, Malaysia’s Federal Court dismissed an appeal by prosecutors to overturn High Court and Appeal Court rulings to acquit Ambika M.A. Shan, who was accused of murdering Adelina Jemira Sau in Penang in 2018.

Sau, 21, from Indonesia’s predominantly Christian East Nusa Tenggara province, died of multiple organ failure in a Penang hospital on Feb. 11, 2018, after being rescued from her employer’s home a day earlier by a migrant workers’ protection group.

She was found outside the front gate of her employer's house with bruises to her face and head and injuries to her arms and legs.

It was alleged Adelina suffered daily abuse by her employer, was forced to sleep on the porch with the dog and was poorly fed. Shan was arrested for murder while her daughter was charged with hiring a maid without a valid work permit.

“We are really disappointed. We feel humiliated. Our efforts are undervalued. How can the Malaysian court acquit and discharge the maid’s employer? This is unfair"

Judges on the Federal Court bench said prosecutors had not presented a good enough reason to overturn the two previous rulings that resulted from a lack of evidence proving Shan physically abused the maid.

The ruling was condemned by activists who said evidence of abuse was clear.

“We are really disappointed. We feel humiliated. Our efforts are undervalued,” Sister Laurentina from the Congregation of the Sisters of Divine Providence, who helped arrange the return of Adelina’s body to Indonesia, told UCA News.

“How can the Malaysian court acquit and discharge the maid’s employer? This is unfair.”

Ambrosius Ku, a relative of Adelina, also questioned the Malaysian court’s decision. “She [Shan] must take responsibility for Adelina’s death since she was clearly abused. We cannot accept this,” he said.

Gabriel Sola, coordinator of a group seeking justice for the maid called the Coalition of Defenders of Adelina Jemira Sau — Victim of Human Trafficking, said his group will look to have Shan prosecuted under Malaysia’s anti-human trafficking law.

“Indonesia has jailed four people for between three and six years for their involvement in illegally recruiting Adelina, who was 15 at the time,” he said.

According to Sola, who is also director of the church-affiliated Advocacy Service for Justice and Peace in Indonesia, Shan has a case to answer in this regard.

“She can help reveal the agent behind the illegal recruitment of Sau. There must be a correlation between the legal process in Indonesia and the one in Malaysia,” he said.