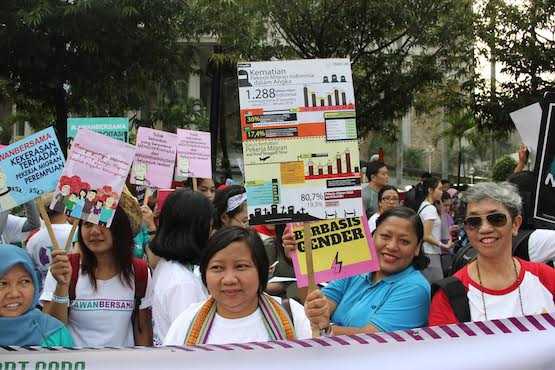 An estimated 1,200 women took part in the second Women's March in Indonesia to push for new regulations to protect women from violence.

Under the hashtag #LawanBersama (fight together), they carried banners as they walked about 2.5 kilometers through Jakarta and gathered at a park in the National Monument area overlooking the State Palace on March 3, five days ahead of International Women's Day.

"We want to fight together to end gender-based violence by pushing for legal protection," Kerrina Basaria, an organizer from the Jakarta Feminist Discussion Group, told ucanews.com on the sidelines of the five-hour program that also included art performances.

She mentioned anti-sexual violence and domestic worker protection bills tabled before parliament as examples. "They must be immediately approved by legislators to protect women from violence," she said.

The anti-sexual violence bill, drafted by the National Commission on Violence against Women, is under discussion in the legislative body. The domestic worker protection bill, laying down what kind of work domestic workers do, working hours and rates of pay, has been pending in parliament since 2004.

Commission chairwoman Azriana Manalu said the event would build momentum for eliminating violence against women among all parties, including legislators.

"It's not only close people (such as family members, neighbours or friends) who do violence to women but also the state through its policies," she said.

She said sexual abuse has victimized many women but legal protection remains low. "As a result, they face difficulties in seeking justice." An estimated 1,200 women march through Jakarta on March 3 to demand legal protection for women. (Photo by Katharina R. Lestari/ucanews.com)

Siti Musdah Mulia, chairwoman of the Indonesian Conference on Religion and Peace, lamented the government's misinterpretation of preventing violence against women.

"It's very often interpreted as a control. If the government wants to protect women, protect us through fair regulations," she said.

According to the commission, there are more than 400 discriminatory bylaws targeting women across Indonesia. For an instance, in Aceh province, which adopts stricter Shariah-based rules and where women are often caned if they break them, one bylaw bans women from straddling motorcycles.

Mike Verawati, a parishioner from Holy Family Parish in South Jakarta, joined the program to show solidarity with women who are victims of violence.

"It's time for Catholics to join society in speaking up for justice," she said, encouraging young Catholics to get involved.

Aisha Servia, a student at Global Jaya School in Tangerang, said it was time to fight for change and for human rights to be upheld for everyone.

"What we need to do now is to educate other people and make them know how important it is to uphold human rights, because we are one and we can't let our differences separate us," she said.