It's spread across archipelago and is fuelled by social divisions, inequality and reluctance to modernize, they say 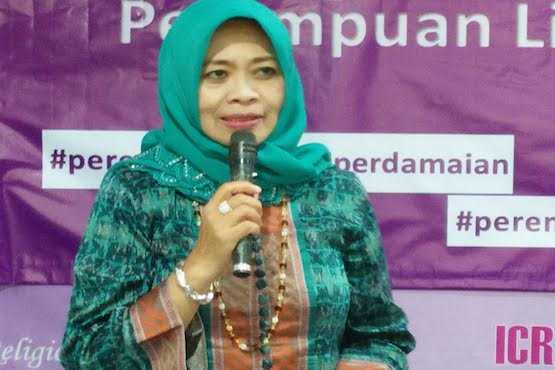 Siti Musdah Mulia, a Muslim intellectual and chairwoman of the Indonesian Committee on Religion and Peace, worries about growing religious intolerance in Indonesia. (Photo by Katharina R. Lestari/ucanews.com)

Women of myriad faiths in Indonesia have spoken out against growing religious intolerance in the sprawling archipelago.

Buddhist, Catholic, Confucian, Hindu, Muslim and Protestant women as well as members of the Ahmadiyya and Baha'i faiths gathered in Jakarta to voice their concerns.

This was done two days ahead of International Women's Day on March 8.

Siti Musdah Mulia, a Muslim intellectual and chairwoman of the Indonesian Committee on Religion and Peace, cited political exploitation of ethnic, religious, racial and community sentiments.

Other factors included social divisions and inequality as well as a reluctance to face modernity among some majority Muslims, she said.

Many poor Muslims were taken for granted by leaders and felt marginalized.

Hate speech and fake news have become widespread in the lead-up to June regional elections and a presidential election scheduled for 2019.

On March 4, police arrested a man on the island of Sumatra over the online activities of a group called the Family Muslim Cyber Army (FMCA).

Six others involved with its operations were previously arrested.

The FMCA sows unrest by posting provocative messages on social media, such as claiming there is a revival of the long-defunct Indonesian Communist Party.

There have also been incendiary postings maintaining that Muslim clerics face persecution and that Islamic places of worship have been destroyed.

Dominican Sister Natalia Sumarni has been saddened by intolerant attitudes.

Nonetheless she has told other Catholic women not to be easily provoked to anger by the politically motivated spreading of falsehoods.

"We must continue to work together to promote national unity," she said.

On a practical note that counters bigotry, the benefits of charity programs Sister Natalia is involved in are available to people in need regardless of their religious beliefs.

Thitacarini, a Buddhist nun, says the nation's diverse religious and ethic groups should exist side by side in harmony like the colors of a rainbow.

However, she noted that in 2016 there were a series of Muslim mob attacks on Buddhist temples in Tanjung Balai, North Sumatra.

The attacks were triggered by a complaint from a member of the Chinese community that loudspeaker calls to prayer from a local mosque were too loud.

It was not difficult for ill-intentioned people to exploit religious sensitivities, observed Thitacarini, who is a PhD candidate in Buddhist Studies at Sri Lanka's University of Kelaniya.

Ketut Oka Harmini, from the Parisada Hindu Dharma administrative council in Indonesia, called for the re-introduction of religious diversity studies in schools.

And there should also be personal development courses.

"In the past we had moral education which, I think, had a good impact on our society," she said.