Failure to pass a law to protect women is emboldening sexual predators, they say Azriana Manalu, chairwoman of the National Commission on Violence against Women, gives a speech at a protest against sexual violence and harassment against women outside the presidential palace in Jakarta on Dec 8. (Photo by Konradus Epa)

Sexual harassment has reached epidemic proportions in Indonesia because government and parliament have failed to provide any legal protection, women's rights activists say.

This failure to provide protection was emboldening men to become sexual predators, they say.

Incidents of sexual predators preying on women are becoming rampant in public places, offices, schools and even in the home, they said during a protest march at the weekend and another on Dec. 10 that saw thousands of women march through Jakarta to mark International Human Rights Day.

One of their demands was for the immediate passing of an Eradication of Sexual Violence Bill that was first put before parliament in 2014. 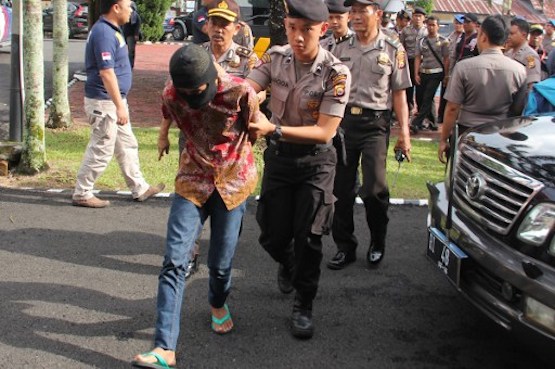 According to the National Commission on Violence against Women the number of rape and sexual harassment cases rose sharply from 259,150 cases in 2016 to 348,446 in 2017.

Many perpetrators were people close to the victims and included teachers, family members, boyfriends, work colleagues and also employers.

"We want the government to pay attention because these cases increase each year," commission chairwoman Azriana Manalu, told ucanews.com during the protest.

Sexual violence prevalence is high in Indonesia and the figures given are likely the tip of the iceberg, said Manalu, who was also spokeswoman for the more than 200 groups taking part in the rallies.

"Unfortunately, this is not being balanced with adequate legal protection for victims," she said.

According to her, Indonesia's criminal code in general is not geared toward dealing with perpetrators effectively.

"Many sexual abuse cases aren't handled well. Hence, there is need for a special law to protect women and prosecute perpetrators in court," she said.

Presently the commission helps provide legal assistance to victims, as well as offer physical and psychological help to aid recovery.

According to Elly Rosita Silaban, a labor activist in Jakarta, women often face sexual harassment and abuse from their bosses or co-workers.

There is nowhere for victims to turn, they either have to endure it or quit.

She said labor law or company regulations are not sufficient tools to protect women at work, because perpetrators are often left unpunished because any such rule is not enforced adequately.

Men know they can get away with it, said Vera, 21, (not her real name) an office worker.

Vera said she had been sexually assaulted while heading to work on public transportation and has been the target of harassment by male "friends" and colleagues on social media such as WhatsApp and Facebook.

"They keep sending me pictures and messages of a sexual nature despite me asking them to stop," she said.

If they won't respect my dignity then maybe they might respect the law if it's passed, she said.