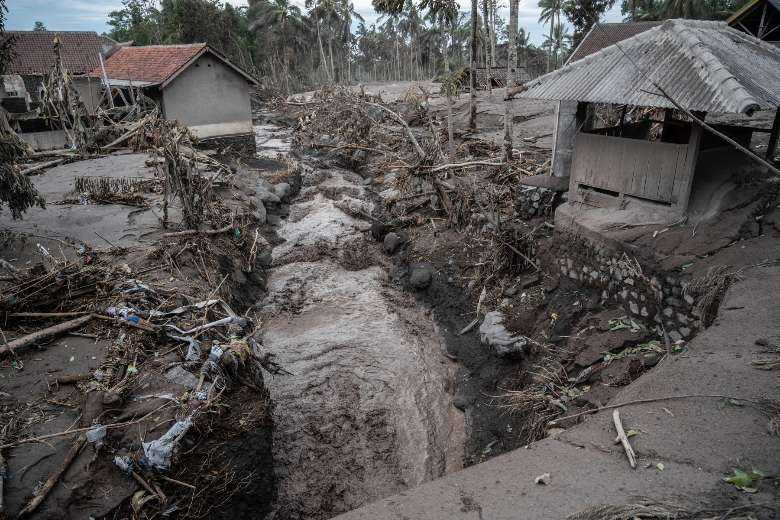 Damaged homes are seen at Sumber Wuluh village in Lumajang on Dec. 6 following a volcanic eruption from Mount Semeru that killed at least 15 people. (Photo: AFP)

Rescuers in Indonesia raced to find survivors in villages blanketed by molten ash after the eruption of Mount Semeru killed at least 15 people and left dozens injured.

The eruption of the biggest mountain on the island of Java caught locals by surprise on Dec. 4, sending thousands fleeing and forcing hundreds of families into makeshift shelters. Catholic groups have joined efforts to help those affected by the disaster.

At least 11 villages of Lumajang district in East Java were coated in volcanic ash, submerging houses and vehicles, smothering livestock and leaving at least 1,300 evacuees seeking shelter in mosques, schools and village halls.

"We did not know it was hot mud," said Bunadi, a resident of Kampung Renteng, a village of about 3,000 people. "All of a sudden, the sky turned dark as rains and hot smoke came."

Dramatic footage showed Semeru pumping a mushroom of ash into the sky that loomed over screaming residents of a nearby village as they fled.

At least 56 people including two pregnant women were injured in the eruption, health officials said, and most suffered serious burns.

There were 10 people carried away by the mudflow. One of them was almost saved. He was told to run away but said, 'I can't, who will feed my cows?

President Joko Widodo ordered a rapid emergency response to find victims after the scale of the disaster became clear, said state secretary Pratikno, who like many Indonesians goes by only one name.

As many as 10 trapped people were rescued from areas surrounding Lumajang as villagers and rescuers worked through the night to find anyone alive or retrieve bodies.

But the rescue efforts were hindered by hot ash and debris, with evacuations temporarily suspended on Dec. 5 due to ash clouds, Indonesia's Metro TV reported, highlighting the difficulty of the operation.

The country's geological agency said rain is expected in the next three days that could further hinder rescue work.

There is also a risk of the rain causing ash sediment to form a new river of hot lava, the country's top volcanologist Surono told the TV station.

Many people who sustained burns had mistaken the hot mudflow for floods so stayed in their villages, said Lumajang Public Order Agency spokesman Adi Hendro. "They did not have time to run away," he said.

Authorities said they are still trying to confirm the whereabouts of at least nine people.

Lava mixed with debris and heavy rain destroyed at least one bridge in Lumajang, preventing rescuers from accessing the area.

"There were 10 people carried away by the mudflow," said Salim, another resident of the village. "One of them was almost saved. He was told to run away but said, 'I can't, who will feed my cows?'"

In other areas, villagers desperately tried to salvage their belongings from wrecked homes, carting mattresses and furniture on their shoulders while others carried goats in their arms.

Locals have been advised not to travel within 5 kilometers of Semeru's crater as the nearby air is highly polluted and could affect vulnerable groups, Muhari said.

Ash spewed by the volcano traveled up to 4km away, Indonesia's geological agency reported, reaching as far as the Indian Ocean in the southern part of Java.

Meanwhile, Carmelite Brother Marco Pantja Anugrah Putra, coordinator of Malang Diocese’s Human Solidarity Team, said the diocese has started to collect donations and material aid from Catholics to help survivors and those affected in cooperation with Mary Queen of Peace Church in Lumajang district and Assumption of Mary Church in Malang district.

“Besides cash, we also need clothing, hygiene kits, brooms, shovels and other material aid,” he told UCA News on Dec. 6.

Asked whether Catholics were among the victims of the eruption, he said there were no parishioners affected by the disaster. “I have confirmed this with the mission station located in Pronojiwo sub-district,” he asserted.

Father Paulus Fajar Ariwiyatno from Mary Queen of Peace Church in Lumajang district said his parish has begun to receive material aid from parishioners and some social groups.

“They include basic necessities, baby and toddler meals, medicine, toiletries and clothes,” he told UCA News.

The volcano's alert status has remained at its second-highest level since its previous major eruption in December 2020 which also forced thousands to flee and wrecked villages.

The head of Indonesia's centre for volcanology said it warned officials on Dec. 2 about increased volcanic activity.

Indonesia sits on the Pacific Ring of Fire, where the meeting of continental plates causes high volcanic and seismic activity, and the country has nearly 130 active volcanoes.

In late 2018, an eruption in the strait between Java and Sumatra islands caused an underwater landslide and tsunami that killed more than 400 people.