Indonesian youths play Pokemon Go in Banda Aceh in July 2016. Leaders of one village in Aceh province have banned cafes from providing free internet because of concerns that youngsters are being distracted from their studies and prayers. (Photo by AFP)

Village leaders in Indonesia's Aceh province have ordered cafe owners to remove free access to their Wi-Fi connections over fears that youngsters are being distracted from their studies, daily Islamic prayers and Quran recital sessions.

Aceh on Sumatra Island is known for its strict implementation of Islamic Sharia. For example, people of the opposite sex are banned from dining together and those who break the rules risk a public caning.

Leaders in Curee Baroh village in Bireuen district sent a circular letter to cafe owners on Nov. 13 to ban them from offering free Wi-Fi access.

The move was taken following discussions among village officials about youngsters showing little interest in studying and reciting the Quran because they were gathering so frequently at hangouts such as cafes.

Village head Helmiadi Mukhtaruddin told ucanews.com on Nov. 28 that the ban is in line with Sharia and the letter is meant to guide business owners to abide by the law.

Aceh has implemented Sharia bylaws since 2001 and many people have been caned in public.

"Free Wi-Fi has caused many children in the region to steal money to buy cellular phones, and students have skipped prayers to enjoy free internet," Mukhtaruddin said. "Children and teenagers in the area go to cafes during school hours and some of them access adult sites containing pornography."

According to Mukhtaruddin, the ban has proved effective, with youngsters returning to regular activities such as praying at mosques and other routines. "If cafe owners reopen free internet, they will be processed legally," he warned.

Muhammad Nazir, an official of neighboring Blang Mane Barat village, said he is also concerned about free internet access in cafes but village leaders have yet to ban it.

"There is growing concern about Wi-Fi access here. Parents and teachers can no longer control their children," he told ucanews.com. 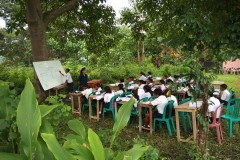 Bireun Communications and Information Agency head M. Zubair said many cafes in the district provide Wi-Fi access to visitors, and Curee Baroh village is the first to ban it.

"We support the Wi-Fi ban as long as it benefits the young generation," Zubair told The Jakarta Post.

Anwar Abbas, general secretary of the Jakarta-based Indonesian Ulema Council, said the cafe internet ban is in line with Sharia but stressed the responsibility of parents to control their children.

"If the circular is useful, we respect the village's decision to shield children from negative aspects," he said.

A secondary school student in provincial capital Banda Aceh saw the prohibition as a warning to him and his peers. "It appeals to me as well," the 14-year-old said.