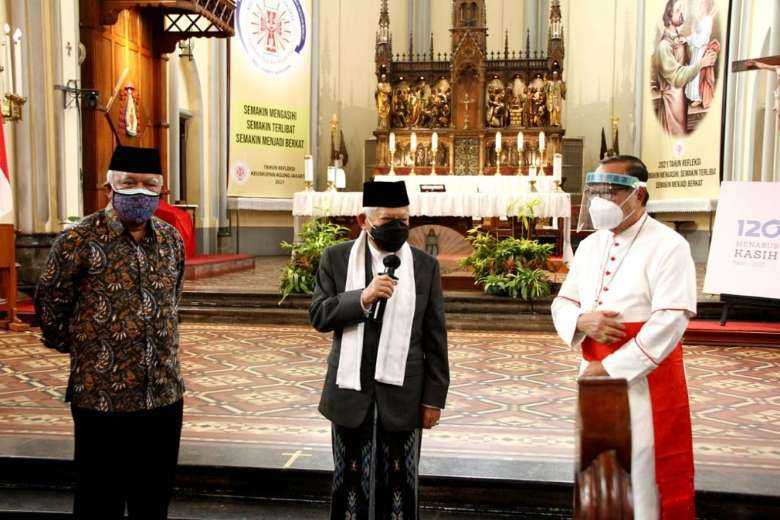 Indonesian Vice President Ma’ruf Amin has made a surprise visit to inspect progress in the construction of a tunnel connecting Istiqlal Mosque with Our Lady of the Assumption Cathedral Church in Jakarta, a project the government is promoting as a symbol of religious unity in the Muslim-majority country.

Construction of the 33.8-meter passageway called the “Friendship Tunnel” is part of the 475-billion-rupiah (about US$34 million) renovation work on the mosque, which began in May 2019. It is reported that the construction of the tunnel is near completion.

The tunnel must be seen as a symbol of mutual respect among religious followers instead of something merely connecting two places of worship.

The mosque and cathedral are situated very close to each other — separated by a narrow waterway — and have long been seen as symbols of how religions coexist in Indonesia.

Muslims and Catholics often share facilities at the largest mosque in Southeast Asia and the city’s oldest Catholic church during major religious festivals such as Eid al-Fitr and Christmas.

“It is not just a symbol. It inspires the promotion of religious harmony between Muslims and Catholics,” Amin said.

During his visit, the vice president took the opportunity to check on how the mosque and cathedral were observing pandemic health protocols.

Places of worship across Java and Bali, which are still under Covid-19 social restrictions, were allowed to reopen at only 25 percent of capacity on Aug. 10.

Father Vincentius Adi Prasojo, secretary-general of Jakarta Archdiocese, said the vice president seemed satisfied with the efforts at the cathedral and mosque.

“The Cathedral Church and Istiqlal Mosque are implementing tight measures that could be adopted elsewhere,” he said.

The cathedral requires each parishioner to be fully vaccinated and register on the archdiocese’s website before attending Mass.

The vice president’s visit “was symbolic of the government’s commitment to ensure safe prayer services during this pandemic,” Father Prasojo told UCA News.

Referring to the tunnel, he said it was in spirit with Pope Francis’ call to “build bridges” among religious followers.