Relics of St. Joseph of Cupertino are donated to Atma Jaya Catholic University in Jakarta 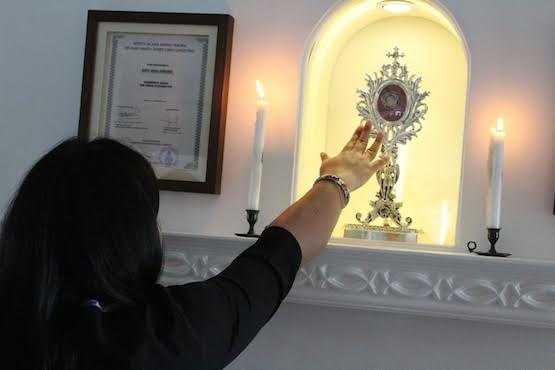 An Indonesian Catholic touches the relics of St. Joseph of Cupertino, on display permanently in the chapel of the Atma Jaya Catholic University of Indonesia in Jakarta. (Photo by Ryan Dagur)

Since St. Joseph of Cupertino is the patron saint of studying, perhaps it was fitting that relics from the 17th-century friar were moved to be on permanent display in the chapel of Atma Jaya Catholic University of Indonesia.

Archbishop Ignatius Suharyo of Jakarta blessed the relics during a March 18 Mass to mark its arrival.

"St. Joseph is known as a figure who wasn't smart enough. He felt anxious every time he would face exams. But he had much trust in God so that he always succeeded," the archbishop said during his homily.

"These relics are small parts of St. Joseph's body, which are close to his heart and liver. So precious," he said.

St. Joseph was born in Cupertino, Naples, in 1603. After spending his childhood and adolescence in simplicity and innocence, he joined the Franciscan Friars Minor Conventual. He died on Sept. 18, 1663; he was canonized by Pope Clement XIII 1767.

In addition to studying, St. Joseph of Cupertino is the patron saint of aviators and flying; as tradition has it, he was known to levitate.

University spokesman Stefanus Ginting told ucanews.com the relics were a gift from Italian Franciscan Father Salvatore M. Sabato. "The priest loves Indonesia so much," he said.

Ginting hoped that the relics will help students to get closer to God through the intercession of the saint.

"Of course, I don't want them to just pray but also study," he quipped.