One of Indonesia’s oldest universities has honored a German-born Jesuit, Father Franz Magnis-Suseno, for his "huge contribution" to the study of philosophy in the country.

The state-run Gadjah Mada University in Yogyakarta, presented the priest with the award on Oct. 21 as part of celebrations to mark the philosophy faculty’s 50th anniversary.

"This award is given to recognize and to honor Father Magnis-Suseno’s dedication, contribution and positive influence on the introduction and development of the study of philosophy," dean of the university’s philosophy faculty Arqom Kuswanjono said.

Father Magnis-Suseno, 81, has written 39 books and about 600 articles mainly on ethics, philosophy and Indonesian culture.

One of his books is Etika Jawa: Sebuah Analisa Falsafi tentang Kebijaksanaan Hidup Jawa (Javanese Ethics: An Analysis of the Javanese Philosophy of Life).

He is an emeritus professor at the Jesuit-run Driyarkara School of Philosophy in Jakarta, where he was also rector from 1988 to 1998 and a former Director of Postgraduate Studies.

He has also been actively engaged in interreligious dialogue.

In November 2016, he was awarded the Matteo Ricci International Prize from the Universita Catholic del Sacro Cuore (Catholic University of the Sacred Heart) in Milan, Italy, for his commitment in promoting interreligious dialogue in the country.

In August 2015, he received the Bintang Mahaputera Medal from President Joko Widodo for his intellectual input towards national development. 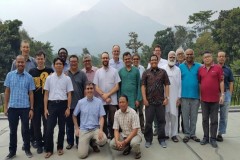