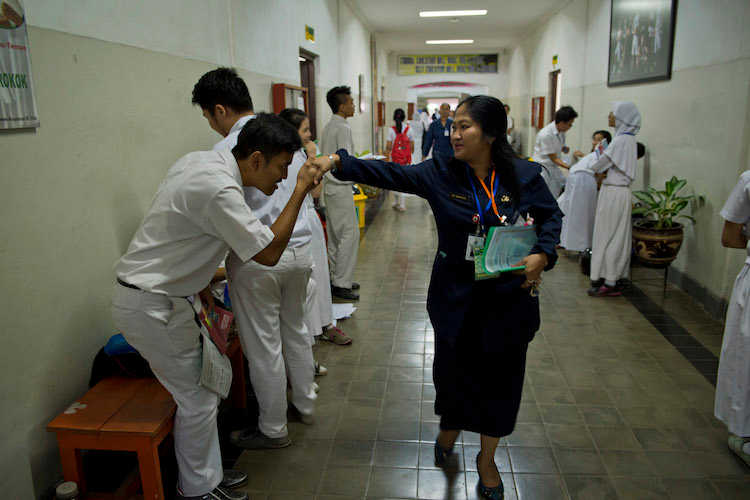 An Indonesian student greets a teacher on the first day of national examinations at a state senior high school in Jakarta in this file photo. Indonesia is to allow universities to employ lecturers from overseas to offset a shortage of educators and boost standards. (Photo by Romeo Gacad/AFP)

Each day Albert, 52 a Catholic lecturer, goes to four private colleges, including a Catholic one in Jakarta, to teach economics.

For three years the lecturer — who chose not to give ucanews.com his real name — taught at a private university. But because his salary was only about US$600 per month, he decided to quit and go freelance.

Some of his friends lecture at six different universities.

"As a lecturer, I want to share my knowledge with students. But I also need to earn a decent salary," he said.

He said one of the main problems higher learning institutions in Indonesia face is poor quality education brought about by low pay that discourages many talented people becoming lecturers.

As a result he said he welcomed a recent government initiative allow foreign lecturers to teach in Indonesian universities on a permanent basis.

"It aims to improve quality, but it will also help push demands for an increase in salary for local lecturers," said Albert, who earned his master's degree in economics from an Australian university.

Indonesia has more than 4,500 colleges and universities, but up to 77 percent are of substandard quality, according to the government. Only a few — including some Catholic ones — have foreign lecturers, but they are mostly visitors and are not permanently employed.

This year the government has allocated some US$35 billion for education, or 20 percent of the national budget. However, this is not enough, according to some critics.

Nico Uskono, a lecturer at Don Bosco Secretary and Management Academy in Jakarta, also welcomes the move to bring in foreign educators but said the government needs to increase the education budget and private college subsidies to allow the policy to bear fruit.

"Hiring foreign lecturers is a good thing to improve standards. But they should not only be for state-run schools but also private colleges [including Catholic ones]," he said,.

He said the presence of foreign lecturers at his school is like a breath of fresh air to students, as well as for local teachers.

"Some universities in Indonesia that collaborate with overseas ones do seem to provide better education," he said.

He believed Parahyangan Catholic University became one of Indonesia's top universities because of its exchange programs.

Bernadette Setiadi, a psychology professor at Atma Jaya Catholic University, said Catholic schools would certainly like to have foreign lecturers on a permanent basis. However, the only problem is that they can't afford to pay their salaries.

"If the government pays their salaries, it would be better," she said.

It would also fill an urgent need because private colleges, including Catholic ones, are facing a shortage of lecturers, said Setiadi, who is also deputy chairwoman of the Association of Indonesian Catholic Colleges, which oversees 19 Catholic universities.

On March 26, President Joko Widodo signed a presidential decree allowing the recruitment of foreigners, including in the field of education. Restrictions were in place prior to this to protect Indonesian nationals in the labor market.

According to Setiadi, the presence of foreign lecturers will not affect Indonesian nationals, but would likely benefit them.

Indonesian lecturers can use the opportunity to cooperate with foreign colleagues to increase their academic research and writing capabilities.

Minister of Research, Technology and Higher Education, Mohammad Natsir, said the ministry is preparing a supporting regulation to ease the bureaucracy for foreign lecturers looking to live and work in Indonesia, including the possibility of issuing a new type of visa for them.

Natsir announced last week that it was opening opportunities for foreign academics to become permanent lecturers at Indonesian universities in an attempt to increase higher education quality and meet international standards.

Another reason, Indonesia has more than three million students, while the number of lecturers stands at around 180,000, causing an imbalance in higher institutions.

However, Franciscan Father Vincentius Darmin Mbula, chairman of the National Council of Catholic Universities, said the policy smells of "a liberalization, marketization and commodification of the education service."

He said there was no need to hire foreigners on a permanent basis.

"The policy is an impact of neoliberalism ideology," he told ucanews.com.

"I agree [foreigners] can be hired temporarily, not as permanent lecturers, and must pass strict selection," he said.

He said foreign lecturers, in order to be able to teach in the country must follow Indonesia's secular ideology and must not threaten national security.