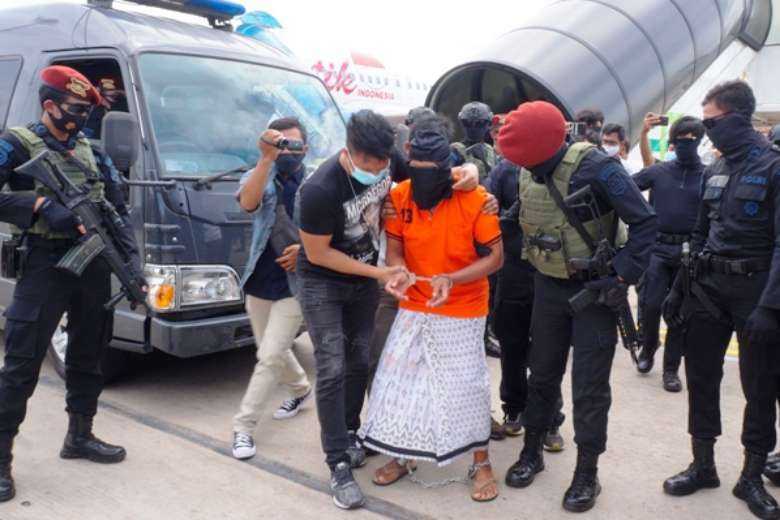 Indonesian police escort 57-year-old Zulkarnaen, a senior leader of the al-Qaeda-linked Jemaah Islamiyah, who had been on the run for his alleged role in the 2002 Bali bombings, on arrival at Jakarta’s Soekarno-Hatta International Airport in Tangerang on Dec. 16, 2020. (Photo: AFP)

Indonesia’s anti-terror police have arrested a member of the Jakarta-based Indonesian Ulema Council (MUI) and two other suspected terrorists linked to Jamaah Islamiyah (JI), which is responsible for a number of attacks across Southeast Asia.

According to national police spokesman Ahmad Ramadhan, An-Najah was involved in JI’s advisory board and chaired the Sharia body of Baitul Maal Abdurrahman Bin Auf set up to raise funds.

The charity, which was established in 2004 and has several branches around the country, is known for helping orphanages and Islamic boarding houses.

Police, however, claimed that it was a cover to entice people into donating to the charity, with some of the money raised going to JI, which has been involved in several deadly attacks in Indonesia including attacks on churches.

Early this month, police froze the charity’s bank accounts following the arrest of its chairman, who was not named, in Lampung province in late October.

Referring to the two other suspected terrorists, Ramadhan said Okbah played a significant role on JI’s advisory board and charity foundation and Al-Hamat had the responsibility to supervise all JI’s members.

On Nov. 17, MUI issued a seven-point written statement, a copy of which was obtained by UCA News, saying that An-Najah’s alleged involvement in the terror group “is his personal affair” and “has nothing to do with MUI.”

MUI suggested that people should prevent themselves from being provoked by certain groups making use of the situation for their own sake.

“We encourage all social elements to focus on the common interest for the sake of national unity and peace,” they said.

They also asserted that MUI has suspended An-Najah “until there is a final legal decision” on his case.