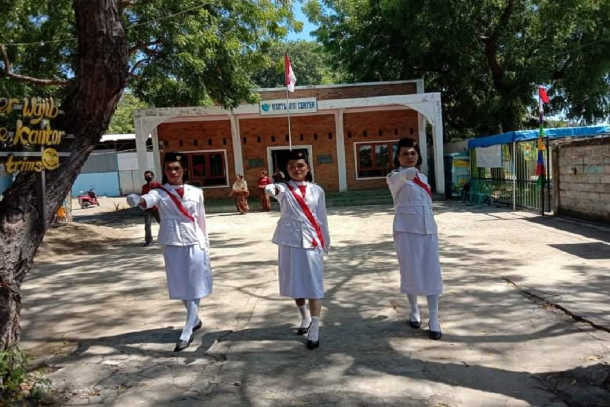 Dozens of transgender women celebrated Indonesia’s Independence Day on Aug. 17 by holding a flag-raising ceremony in a symbolic gesture to call for their rights to be respected in the conservative country.

Nearly 50 women in traditional dress attended the ceremony, the first of its kind in the former Dutch colony, at Maumere Diocese’s Mission Work Center in Maumere in predominantly Catholic East Nusa Tenggara province.

The patriotic ceremony was organized by Fajar Sikka, a group founded in 2018 by Hendrika Mayora Victoria, 33, a former religious brother.

“The ceremony is the first of its kind in Indonesia involving all transgender people,” Victoria told UCA News. “We wanted to show our love for this country and respect all our national heroes who fought for our independence.”  Victoria, who is also chairwoman of a village council, said the ceremony was a symbolic gesture to show that lesbian, gay, bisexual and transgender (LGBT) people are patriotic like other Indonesians and that their rights should be respected. “Many LGBT people often face discrimination and persecution. They even lose their rights as citizens,” she said without elaborating.

A survey conducted in 2018 by the Saiful Mujani Research Center found that 87.6 percent out of 1,200 respondents saw LGBT people as a threat, while 81.5 percent of LGBT people surveyed said their sexual orientation was prohibited by religion. “I hope that both the government and society will no longer look down on transgender people. We should all have equal rights,” Victoria said. Bishop Ewaldus Martinus Sedu of Maumere called the Independence Day ceremony “a positive act.” “I think society’s view of transgender people has gradually softened over time. This gesture will help this trend,” he told UCA News. Meanwhile, President Joko Widodo presided over an Independence Day flag-raising ceremony at the presidential palace in Jakarta. Only a few officials attended the ceremony, while many others joined the event online due to the Covid-19 pandemic.