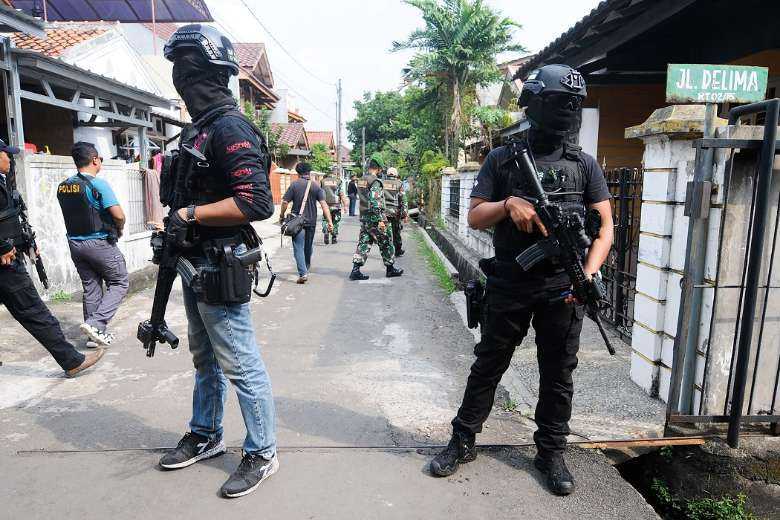 Anti-terror police conduct a raid in Tangerang, near Jakarta, on May 16, 2018, following a spate of terror attacks in Indonesia. (Photo: AFP)

At least 198 Islamic boarding schools have ties to terrorist networks, according to Indonesia’s National Counterterrorism Agency.

Agency chief Boy Rafli Amar made the claim at a meeting with MPs on Jan. 25, saying the assessment was a result of the agency’s terrorism prevention efforts last year.

“There are 11 Islamic boarding schools with ties to Jamaah Ansharut Khilafah, 68 with Jemaah Islamiyah and 119 with links to [Jamaah] Ansharut Daulah, an Islamic State affiliate,” he said.

Jemaah Islamiyah, which has links to al-Qaeda, has been blamed for a series of terrorist attacks in Indonesia and Southeast Asia over the past few decades, including the 2002 Bali bombings and attacks on Christian churches.

Jamaah Ansharut Khilafah, believed to operate in Central Java province, was established in 2015 by a former leader of Jemaah Islamiyah's education division.

Stanislaus Riyanta, an intelligence analyst from the state-run University of Indonesia, said the revelation should come as no surprise and indicated terrorist networks were changing tactics.

“Instead of using terror, they are targeting religious activities to gain influence in society. They can infiltrate Islamic boarding schools easily and spread their radical ideology like a Muslim cleric delivers a sermon,” he told UCA News.

He said terrorist networks are using Islamic boarding schools as tools to meet their goal.

“They want to gain political power. So, the first thing they need to do is recruit more members,” he said.

He said a concerted effort to root out such extremism in these schools is needed by the state.

“Make sure these schools stick to the existing curriculum on Islamic religious education and their teachers are thoroughly vetted. Parents also need to be extra careful about which school to send their children,” he said.

Franciscan Father Vinsensius Darmin Mbula, chairman of the National Council of Catholic Education, called the revelation “worrying,” especially for Christians who have often been the targets of extremists.

“Islamic boarding schools must be managed inclusively and build good relations with others. It’s distressing to hear about such links to extremists,” he told UCA News.

He said the government needs to act quickly to turn these schools away from extremism and to prevent others from falling under its spell.