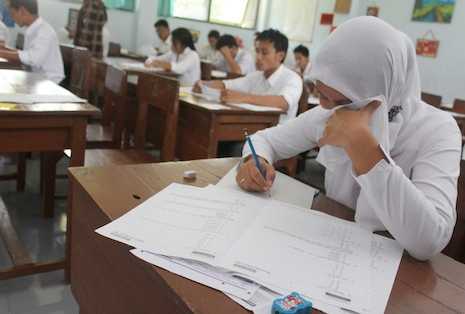 Teachers in Bandung say a book distributed by the Ministry of Education and Culture to schools across West Java since August promotes religious extremism. (AFP Photo/Aman Rochman)

By Yuli Krisna for the Jakarta Globe

Teachers in Bandung, West Java, have raised concerns over the distribution of thousands of schoolbooks, which they say teach religious intolerance and radicalism.

Iwan Hermawan, vice principal of the State Senior High School 9, said his school received 440 books on Islamic teachings, which contain a chapter titled “Rise Up All Islamic Fighters” and details the teachings of Muhammad Abd Wahhab, the founder of the Wahhabi Muslim movement.

Wahhabism is known for its ultraconservative, literal interpretation of Islam.

One part of the book reads: “Those who worship other than Allah are infidels and must be killed.”

Iwan said the books have been distributed by the Ministry of Education and Culture to schools across West Java since August.

“This can spark intolerance and frictions with other religious groups,” Iwan said.

The book is officially printed and distributed by the Ministry of Education and even contains a prologue by then-minister Mohammad Nuh.

“This means the book is compiled, studied and examined by various people under the minister M Nuh,” Iwan said.

The book was printed as part of the controversial 2013 curriculum.

The book listed the names Mustahdi and Mustakim as authors, and Yusuf A Hasan and Muhammad Saerozi as reviewers.

Iwan, who is also the secretary general of the Indonesian Independent Teachers Federation (FGII), said the same book was found in dozens of high schools and vocational schools across Bandung.

“I am concerned that students will interpret [the book] the wrong way. I am also fearful that teachers with the same [radical] perspective will teach students intolerance and radicalism,” Iwan said.

“[The teachers] will think it is alright to teach radicalism, because this is a book sanctioned by the education ministry.”

The FGII on Tuesday officially requested for the book to be recalled. The book’s presence sheds new light on how extremism and intolerance flourishes and spreads in Indonesia, particularly among school students.

A recent survey by the Setara Institute for Democracy and Peace, involving nearly 700 students from 76 high schools in Jakarta and 38 in Bandung, showed that 7 percent of the respondents agreed with the Islamic State movement’s aims.

“That means one in every 14 students agrees with ISIS,” Bonar Tigor Naipospos, deputy chairman of the non-governmental group, said in Jakarta on Monday, referring to the extremist group’s old acronym.

He added that 75 percent of students have heard of IS, mostly from social media and the internet. Most have a negative view of the radical movement; saying that they recognize that IS is a sadistic group intent on spreading terror and using violence in the name of religion.

But those who sympathize with IS do so because they believe the terror group has established an Islamic caliphate.

They said they agreed with the view that Indonesia’s five founding principles of Pancasila should be replaced with Islamic ideology.

Setara researcher Muhamad Syauqi said some of the students who sympathize with IS contributed to the so-called “jihadist selfie” phenomenon, where they spread pictures through social media of youths in uniform — presumably IS members in Syria or Iraq — who take photos of themselves in front of army tanks or while holding rocket launchers.

“That makes them [those spreading the selfies] feel ‘cool,’ ” Syauqi said.

The book also confirms suspicion among some human rights and religious tolerance advocates that the government — or at least some elements of it — is to some degree involved in the spread of intolerance and radicalism despite pledging otherwise.

Indonesians were recently shocked by a video that appeared to show Indonesian-speaking children training with assault rifles in front of an IS flag. The video has since been removed from most websites, including Google-owned YouTube.

Rudiantara said the partnerships had enabled the government to remove 78 Indonesian sites with pro-terrorism content.

But the House of Representatives’ Commission I, which oversees defense, intelligence, foreign affairs, communication and information, responded by summoning Minister Rudiantara to explain the government’s decision to block access to 19 websites believed to have spread radical Islamic ideology.

“We will invite the communications minister immediately to give an explanation,” Hanafi Rais, deputy chairman of Commission I, said on Tuesday.

The ministry said the sites were blocked after it received a request from the National Counterterrorism Agency, which included them in a list of 22 media sources allegedly spreading radical ideology.

Hanafi attacked the government’s “rash” decision to block access to the websites.

“The government’s decision to block the media could create the impression that the government under President Joko Widodo is developing Islamophobia,” he said.

Meanwhile, police are investigating what appears to be a failed bomb attack on the Kompas TV office in Makassar, South Sulawesi, by alleged sympathizers of the IS.

“We are still investigating the case,” Senior Commander Endi Sutendi, a spokesman for the South and West Sulawesi Police, told Tempo.co on Tuesday.

“We can’t immediately draw a conclusion,” he added.

The bomb was found around 9pm on Monday, in a plastic bag placed some 20 meters from the office in Panakkukang subdistrict.

“I didn’t open the package and told Panakukkang police about it,” said the head of security of the Kompas TV office, Gassang Daeng Kulle.

The bomb package had a statement written on it that said “To Kompas sampah [trash] dari [from] Islamic State,” and came with a handwritten letter threatening “infidel” Indonesian media. It was signed “Anshor Daulah Makassar,” an alleged IS sympathizer group.

A police bomb squad arrived at the office in time to defuse the bomb.

Used with permission from the Jakarta Globe.