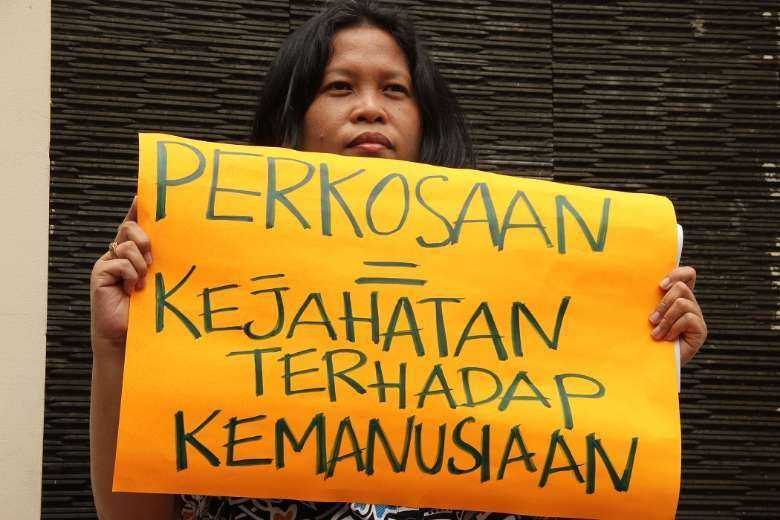 A woman activist holds a banner that says 'Sexual violence is a crime against humanity' during a protest in Jakarta in this file photo. (Photo: Ryan Dagur/UCA News)

A rights group has welcomed an Indonesian Supreme Court ruling to uphold a decree on preventing and dealing with sexual abuse in higher education institutions.

In a statement on April 22, ASEAN Parliamentarians for Human Rights (APHR) said the ruling was "aligned with the principle of gender equality” and guarantees “the individual rights of all Indonesians to be free of harassment regardless of their gender.”

The decree was issued by Nadiem Anwar Makarim, Indonesia’s minister of education, culture, research and technology, in August last year in response to reports of rampant sexual abuse in universities.

It provides a wider definition of sexual violence, which includes verbal, physical and non-physical sexual assault as well as assault through information and communication technology. It also introduces an array of punishments for perpetrators in universities, including dismissal or expulsion

However, the decree, which also focused on prevention and recovery and was supported by various civil society organizations, was opposed by conservative groups including the Islamist-based Prosperous Justice Party, who alleged it contained wording that encouraged adultery.

“There is still a lot of homework, especially regarding implementation, but this is a good step towards gender equality and providing better protection to all Indonesian women and girls”

Mu Sochua, an APHR board member and former Cambodian MP, said: “In the context of rampant sexism, discriminative laws and the ongoing marginalization of women,” the ruling is “a breath of fresh air in Indonesia.”

“There is still a lot of homework, especially regarding implementation, but this is a good step towards gender equality and providing better protection to all Indonesian women and girls,” she added.

The ruling was also welcomed by the Ministry of Education, Culture, Research and Technology.

Chatarina Girsang, the ministry's inspector-general, said: “We thank the academic community throughout Indonesia as well as various civil society groups for their support. The implementation of this decree is catalyst to uniting our efforts to protect higher education from the threat of sexual abuse that will damage our future."

The National Commission on Violence Against Women said in a statement that the Supreme Court's ruling strengthened the implementation of the new law against sexual violence that was passed by the Indonesian parliament on April 12.

"Specifically, this decision also strengthens victims' access to education, especially women, in fighting for justice and their recovery," it said.

Franciscan Father Vinsensius Darmin Mbula, chairman of the National Council for Catholic Education, said the ruling was part of a positive trend of changing attitudes of various parties in Indonesia who saw sexual violence as a serious problem for all.

“I consider this as good news for the collective movement to fight sexual abuse,” he said. “Catholic educational institutions have also tried to participate in this effort through guidelines launched last December on how to prevent and handle sexual abuse in schools."