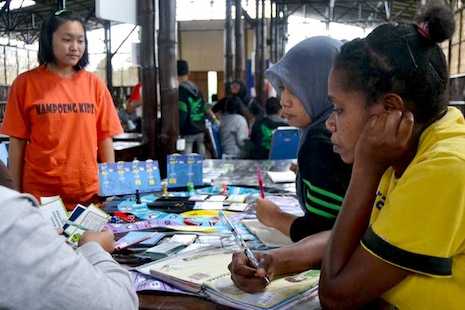 That morning, Stefani Ditya Kristanti is assigned to lead the daily prayer in front of her. The 12th-grader asks for permission from her peers at the Selamat Pagi Indonesia, or Good Morning Indonesia, High School to lead the prayer according to her Christian faith. Her classmates proceed to bow their heads but pray according to their own beliefs.

“Every student gets the chance to lead the morning prayer,” says Stefani. “Which is why I know how Hindus, Buddhists, Catholics and Muslims say their prayers.”

Established in 2007, SPI high school, located in the town of Batu, East Java, promotes tolerance to its students by providing free education to teens of different ethnic and religious backgrounds.

Founder Julianto Eka Putra believes that by allowing students from across the country to study and live together, they will learn more from each other about different cultures and religions found in Indonesia, an archipelago home to 250 million people of different ethnic groups, cultures and dialects.

Julianto, a successful businessman who hails from Surabaya, was saddened by a wave of religious intolerance sweeping the nation, threatening the country’s national motto of “Unity in Diversity.”

He then turned to social media for the enrolment process, hand-selecting 40 students — the same number he is willing to accept each year — making sure that they are of different religious and ethnic backgrounds. He prioritizes those who are orphans or come from poor families.

From the day they first set foot on school grounds, Julianto teaches them about tolerance and appreciating diversity.

“Every year, I hold a contest challenging any student who can find two objects, animate or inanimate, that are exactly the same, I will give them Rp 1 billion. To this day, no one has claimed the prize,” he says.

Stefani, who hails from Pacitan, East Java, says she is fortunate to learn about different cultures and customs from her peers. She shares a room with students from Kalimantan, Papua and East Java.

“I just found out that people from Banyuwangi call cassava, sawi, but where I’m from sawi is another vegetable [leaf mustard],” she said.

For Stefani, the experience has led her to appreciate Indonesia’s diverse cultures and made her eager to learn more about other regions across the archipelago.

Meanwhile, for Ridwan Dinar Maleo, his experience at the school has proven to have a more profound impact. Hailing  from Bandung, West Java, he concedes that before enrolling at SPI, he only had friends who are Muslims. Socializing only with Muslims led him to be more conservative and less tolerant towards people of other faiths.

He admits he used to think that all other religions are wrong. But that all changed when he joined SPI and shared a room with a Christian boy from Poso, Central Sulawesi.

“He told me he feels traumatized whenever he meets a Muslim,” Ridwan said.

Between 1998 and 2005, Poso was the scene of a bloody sectarian conflict between Muslims and Christians, which led to the deaths of hundreds of people. The conflict has since receded but isolated clashes and terrorist acts continue to disrupt the peace several times a year. Security officials still consider the area conflict-prone and a terrorism hotspot.

Ridwan says meeting a Christian student from Poso changed his life and altered his views on the various religious groups who call Indonesia their home.

“All religions teach people to do good. It is people who don’t [follow that tenet]. That is the most important lesson we have received here,” he says.

Ridwan now calls students from various beliefs his friends and proudly boasts that he has helped organize every single religious celebration at the school: Muslim, Christian, Hindu and Buddhist.

Stefani and Ridwan are among the 123 students currently studying at SPI. In addition to attending regular subjects, students also learn through informal classes and discussion groups on subjects not found in any other school, such as personal finance and entrepreneurship.

Students also profit from the school’s many benefits, which include health care and monthly allowances.

But school founder Julianto says people haven’t always been trusting of what he is trying to do. The surrounding community used to suspect he was running a Christianization scheme, while students and parents always associate free education with low quality.

“Now a lot of parents and students are competing to be accepted here. But our quota for each region and background is limited,” he says

SPI vice principal Didik Tri Hanggono says he hopes the school will one day accept students who practice the Chinese-based faith of Confucianism.

“To this day, we haven’t been able to find a Confucian religious teacher with a college degree [in Confucianism]. All high school teachers are required to have a [relevant] college degree,” he said, adding that he has big plans for SPI, but he wants to improve its quality without focusing on increasing the student population or adding another branch to the school.

In line with SPI’s philosophy,  Didik is  more concerned about eradicating poverty by providing his students with a sense of entrepreneurship and job skills.

“If someone is prosperous … they can fulfil other needs, like access information through the Internet, mass media, newspapers and television. So doctrines [of intolerance] can be easily dismissed when [students] are better informed and not easily provoked,” he says.