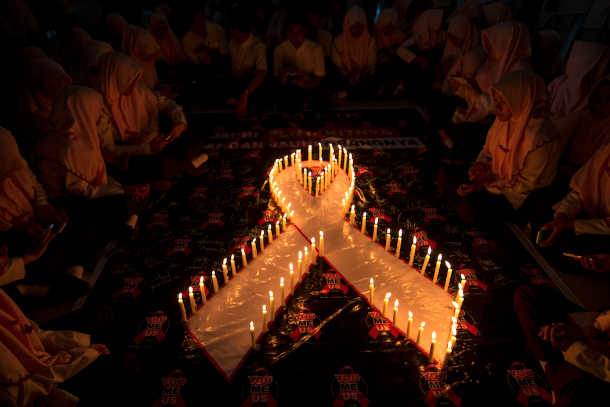 Indonesian students hold a rally to increase awareness of HIV and AIDS at a university in Surabaya, Indonesia in this Dec. 1, 2015 file photo. (Photo by Juni Kriswanto/AFP)

Education authorities in Indonesia's North Sumatra province barred three children with HIV from attending school this week after caving in to protests from parents who feared their children could contract the virus and had even demanded they be kicked out of their village.

The children, aged 7, 10 and 11, are orphans and in the care of a humanitarian organization run by Batak Protestant Christian Church (HKBP) in Nainggolan, a village in Samosir district.

The row began after they were recently sent to a local kindergarten and elementary school to study.

After finding out the children were infected, parents of other children at the schools objected and demanded that they be expelled.

Berlina Sibagariang a HKBP volunteer worker said they even received an ultimatum from parents that the infected children had to leave Samosir by Oct. 25.

She said that at one meeting to discuss the issue, the Samosir deputy regent, Juang Sinaga, had proposed the three children should be removed from the village and sent to live in a nearby forest.

Samosir Regent, Rapidin Simbolon rejected that move but confirmed they would be taken out of the schools, saying he could not force the parents of other children to accept them.

"The reaction of the parents is understandable. It's because they love their children," he said on Oct 23.

The children would undergo home-schooling instead, he said.

"That's the best step. We also want to make sure they do not face discrimination from other children in schools."

The case has sparked outrage among activists and rights groups.

Sibagariang said the home-schooling compromise was in itself a form of discrimination. "It will make these children feel isolated," she said.

Baby Rivona Nasution, who was diagnosed with HIV in 2003 and is now the national coordinator of the Indonesian Positive Women's Association (IPPI) said the case shows that many people, including those in government, still do not fully understand HIV.

"The government should be responsible for correcting such misunderstandings, instead of allowing discrimination against those with HIV to continue," she said.

According to the latest figures from UNAIDS, Indonesia has 48,000 new HIV infections and 38,000 AIDS-related deaths in 2016. Of the new infections, 3,200 of them were children, due to mother-to-child transmission.