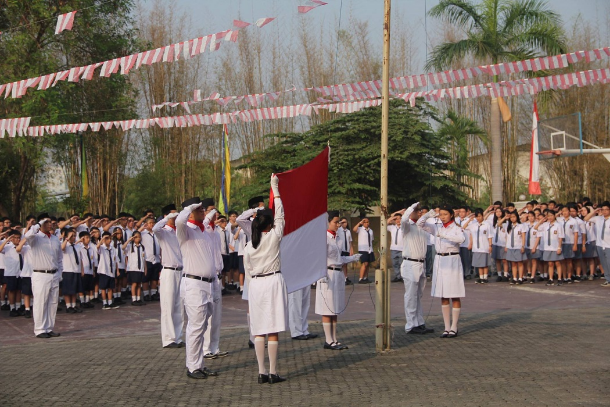 Students raise the Indonesian flag at a private school in Jakarta. Two Jehovah's Witness students were recently expelled from a school in Batam in Riau Islands province for refusing to salute the national flag. (Photo: Lorens Yosef)

Share this article :
An Indonesian school has expelled two Jehovah's Witness students for being unpatriotic. The two, who were in their final year at a junior high school in Batam in Riau Islands province, were kicked out for refusing to salute the national flag, sing the national anthem or attend religious classes, the Jakarta Post newspaper reported on Nov. 27. According to school administrators, the students had refused to participate in the activities since first arriving at the school and the move to eject them was made after consultations with Batam Education Authority and the local branch of the Religious Affairs Ministry. "We held a series of meetings to discuss this issue, but their parents kept defending their actions by saying it was part of their beliefs," said school committee head Dadang, who like many Indonesians uses only one name. “So, despite the parents wanting them to continue studying at the school, the decision was to expel them.”  According to Jehovah's Witnesses, bowing before a flag or saluting it and the national anthem are a form of idolatry.
Related News Franciscan Father Vincentius Darmin Mbula, chairman of the National Council of Catholic Education, backed the school’s move, saying that all students must abide by regulations and laws. “The sanction applied by the school is in line with the Indonesian constitution,” he told ucanews. He said that before taking the decision the school undertook a long process to try and educate the students and make them aware that saluting the flag and singing the national anthem are required from all Indonesian citizens. “Our religion and faith must be in accordance with the national ideology of Indonesia,” Father Mbula added.  The Setara Institute for Democracy and Peace rights group also backed the school’s actions. “It’s obligatory for Indonesian citizens to salute the flag and sing the anthem,” deputy chief Bonar Tigor Naipospos said. Erry Syahrial, a member of the Batam Child Protection Commission, said the expelled students now had the option of finishing their studies elsewhere such as a learning center to get their secondary education certificates. However, Retno Listyarti, commissioner of the Indonesian Child Protection Commission, did not agree with the expulsion. She said ejecting them from formal education would be harmful to their development. “We don’t want the children to become victims,” she said. Jehovah’s Witnesses, who have their headquarters in Brooklyn, New York, first came to Indonesia in the 1930s and have about 27,000 members in the Muslim-majority nation. Unlike mainstream Christianity, Jehovah’s Witnesses reject the concept of the Trinity that God, Christ and the Holy Spirit are all aspects of one God. The group’s objection to military service and refusal to salute national symbols has brought it into conflict with several governments worldwide, leading to the persecution of its members or the banning of their activities in some countries.