Woman who caused scene with dog in place of worship should not face charges because she is mentally ill, they say The woman at the center of the storm with police after being ejected from the mosque in Sentul City on June 30. (YouTube screengrab)

Indonesian rights activists have called for the immediate release of a mentally ill Christian woman arrested after storming in and creating a disturbance at a mosque in West Java.

The woman, identified only as SM, was arrested on June 30 and later charged with blasphemy after she walked into a mosque wearing shoes and with her dog, acts considered sacrilegious to Muslims.

The incident occurred in Sentul City, about 34 kilometers south of capital Jakarta.

Rights group Setara Institute for Democracy and Peace issued a statement on July 11 calling on police to release and drop proceedings against the woman.

“The Criminal Code states that someone who suffers from mental illness cannot be responsible for his or her actions,” the rights group’s vice-chairman, Bonar Tigor Naipospos, told ucanews.com. 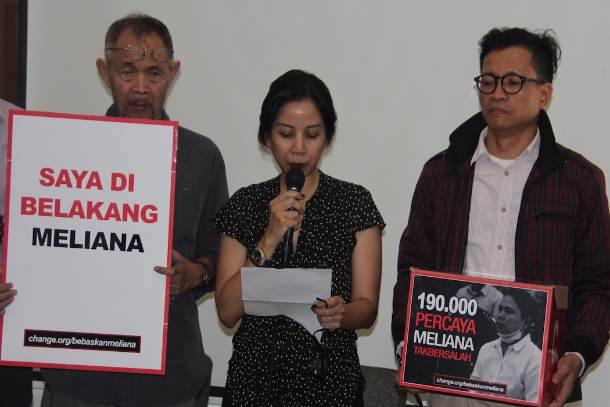 “Why she is still in custody is perplexing since police have admitted she clearly suffers from a mental illness, her case must be dropped,” he said.

Doctors believe the woman is suffering from schizophrenia.

Witnesses said she entered the mosque and had demanded to see her husband who she thought was about to take a second wife.

“Putting her in prison will only make her condition worse,” Naipospos said.

The group has also urged police to not use cave in to pressure from conservative Muslims who want to see the woman punished.

Arif Maulana, director of the Jakarta Legal Aid Foundation, voiced similar concerns. He said his group has made the same demand that police close the case.

“Detaining her abuses her right to health protection,” he said. “The woman needs special treatment not a blasphemy accusation against her.”

Father Antonius Benny Susetyo, a member of a presidential task force involved in promoting national unity, said the police should tread carefully in order not to stir interreligious disharmony.

“If she is proved to be mentally ill, there is no point continuing legal action against her,” he said.

Bogor police chief AM Dicky Pastika Gading said the woman is being treated in a local hospital but gave no indication police would drop the case. "She remains a [police] detainee," Indonesia’s news portal detik.com quoted him as saying.