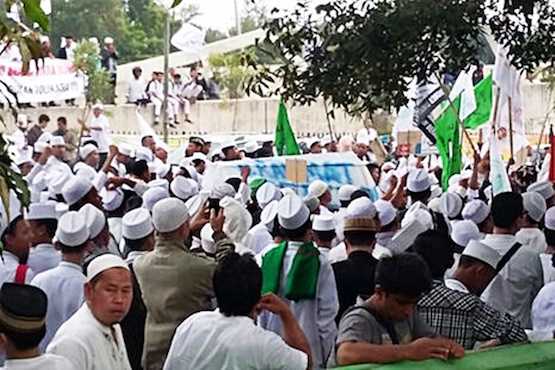 Religious leaders in Indonesia are pushing for an end to abuses by some local government authorities of a 2006 decree regulating places of worship.

They say the decree has been unfairly used to block construction of churches and other new religious minority premises.

According to about 450 religious leaders who on Feb. 10 concluded a three-day meeting in capital Jakarta, the problem lies in how local authorities implement the rules.

The decree states that religious officials should provide the signatures of 90 worshippers as well as signed support from at least 60 residents. Village heads also need to approve the building of a new church or other place of worship.

In 2010, for example, the congregation of a Presbyterian church in Bogor, West Java, was banned from using their church after local authorities revoked a building permit.

The local mayor ignored a later Supreme Court ruling that the congregation could use the building.

Since 2012, the congregation has held Sunday services in a street in front of the Presidential Palace in Jakarta to press for the church to be reopened.

In 2017, violence flared when hundreds of Muslims staged a protest against construction of a church at St. Clara Parish in North Bekasi, West Java.

This happened even though the parish had obtained a construction permit from local authorities.

The recent Jakarta interfaith gathering agreed that the decree should be retained as it was based on an agreement between religious leaders and government officials.

However, Din Syamsuddin, a presidential special envoy for interfaith dialogue, said there is a need to push for fairer implementation.

He said violations of its provisions were continuing to make it difficult for minority religious groups to build places of worship.

Reverend Gomar Gultom, secretary of the Communion of Churches in Indonesia, said local authorities were often intimidated by hard-line militants in Muslim-majority Indonesia to ban construction of new churches.

One result is that many Protestants still hold Sunday prayers in strip malls.

Uung Sendana L. Linggaraja, a Confucian leader in Indonesia, said changes in the way the decree is put into effect are needed to prevent religious disharmony.

Jayadi Damanik, from the National Commission on Human Rights, said there would be fewer "counter-productive" decisions if local authorities properly understood the intentions of the decree.

According to the Setara Institute for Democracy and Peace, violations of religious freedom are still rampant in Indonesia, including through the banning of some religious activities.