A province on Indonesia’s Sumatra island has declared an eight-month emergency to try and prevent peat fires that blanket the region and beyond with harmful haze each year.

He said the emergency will stay in place until Oct. 31 and was declared now because of several fires that had already broken out.

He said medium to large fires were reported near Dumai city as well as in Bengkalis, Rokan Hilir and Siak districts.

Syamsuar said the province is prone to fires because at least 54 percent of its landmass, about 8.9 million hectares, is peatland.

He said he hoped measures, including stiff penalties, to prevent fires would go one better than last year, adding his administration succeeded in reducing peat fires by up to 84 percent.

These techniques are illegal but are used to clear vast tracts of land for palm oil as well as pulp and paper plantations.

The dry season also makes the province a tinder box that often causes wildfires that pollute the air in Riau and nearby provinces and neighboring countries. 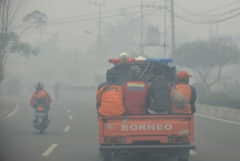 Firefighters and volunteers are also at a state of readiness, Sanger said.

Father Chrisanctus Paschalis Saturnus, of the Indonesian bishops’ Commission for Justice and Peace and Pastoral Care of Migrants and Itinerant People in Sumatra, said any effort to prevent haze is welcome.

“The impact of peat fires is too huge. Almost all regions on Sumatra are affected,” he told UCA News.

Riko Kurniawan, executive director of the Riau chapter of the Indonesian Forum for the Environment, said the emergency will only be effective if local authorities ensure that both plantation owners and local farmers avoid slash-and-burn techniques.

According to Greenpeace Indonesia, more than 260,000 hectares of peatland are burned each year across the country, destroying ecosystems and contributing to climate change.