Damage caused to a West Sulawesi church was committed by a 'mentally ill' man, not Muslim extremists, they say 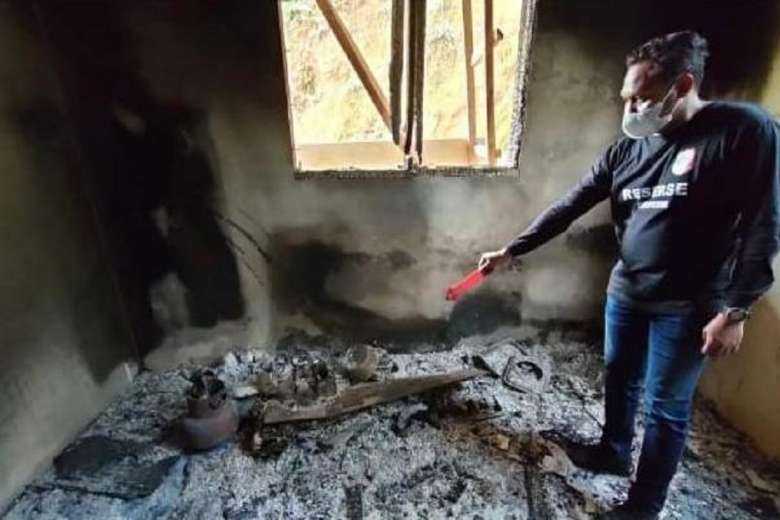 A policeman examines fire damage at the Toraja Mamasa Church in Mamasa district in Indonesia's West Sulawesi province that was attacked on June 26. (Photo: YouTube)

An attack that saw a man vandalize and attempt to burn down a Protestant church in Indonesia last month was the act of a mentally ill individual and not a case of religious intolerance, a church group says.

The attack took place at the Toraja Mamasa Church in West Sulawesi province’s Mamasa district on June 26, leading to speculation on social media that it was an attack on Christians by Muslim hardliners.

However, the Communion of Churches in Indonesia (PGI) sought to allay such fears on July 6, saying the attack was carried out by a congregant of the church who was "mentally ill.”

"Local police have processed this case in accordance with applicable procedures without finding any evidence that points to the involvement of other parties or intolerance being the motive," PGI spokesman Philip Situmorang said.

Situmorang criticized social media posts pointing the finger at extremists. He said the PGI hoped "all parties will not be easily provoked by those who use false information for certain purposes."

"Let's work together to increase smart literacy through social media and build a critical and constructive culture as citizens of the nation and the church," he said.

From the information we have obtained, he has committed several acts of vandalism in his village

According to Mamasa police, the 40-year-old suspect admitted to attacking the church after a dream in which his dead father told him his belongings had been stolen and taken to the church.

“He then woke up in an emotional state, went to the church armed with a machete, vandalized the interior and tried to set the place on fire,” said police investigator Dedi Yulianto, adding that pews, tables, a sound system and documents were damaged.

He said the fire was put out by local residents.

"From the information we have obtained, he has committed several acts of vandalism in his village," said Yulianto

The suspect will undergo a psychiatric examination as part of the criminal investigation, he said, adding that terrorism had been ruled out.

Reverend Yusuf Artha, general secretary of the Working Board of the Toraja Mamasa Church Synod Council, said the local congregation was glad to hear the attack was not sectarian.

In the last few months, there have been several attacks against Christians in Sulawesi by terrorist groups, which led to the speculation about extremists, he said.

On May 11, four Christian farmers including a Catholic were killed by extremists from the East Indonesia Mujahideen group in Poso district of Central Sulawesi province.

The attack by a newlywed couple belonging to the Jamaah Ansharut Daulah (JAD) terror network left the two bombers dead and at least 20 people wounded.