Police and hospital officials store the body bags of victims at a morgue in a general hospital in Tangerang on Sept. 8 after a prison fire broke out and killed 41 inmates. (Photo: AFP)

At least 41 inmates died and over 70 were injured in a fire at an overcrowded prison near the Indonesian capital Jakarta today.

The blaze reportedly broke out in the early hours in the prison in the city of Tangerang, about 30 kilometers west of the capital.

It started and tore through a small prison block containing at least 122 inmates, most of whom were convicted on drug, terrorism and murder charges.

Two foreign inmates from Portugal and South Africa were reportedly among the victims, many of whom were found locked in their cells.

Jakarta police chief Fadil Imran said an investigation into the cause was underway but preliminary findings pointed to an electrical short circuit.

Indonesian Law and Human Rights Minister Yasonna Laoly, who visited the prison, offered his condolences to the victims and their families.

The government should evaluate security officers, safety and general conditions in this prison and others in this country so that there is no repeat of this tragedy

He said the prison was built in 1972 and the wiring dated back to that period.

Many of those who died were locked in their cells, he said, adding the fire spread so quickly that officers were unable to evacuate them in time.

He said their bodies have been brought to the Indonesian police hospital in Jakarta to be taken for autopsies. 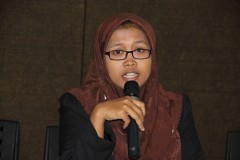 "We will meet with the families of the victims who will be compensated," Laoly  said.

Father Paulus Christian Siswantoko, executive secretary of the Indonesian bishops' Commission for the Laity, expressed shock at the loss of life and called for a review of prison conditions and safety procedures in the country’s jails, many of which are overcrowded.

“The government should evaluate security officers, safety and general conditions in this prison and others in this country so that there is no repeat of this tragedy,” he told UCA News.

He said if this is the result of human error then those responsible must be punished, especially so if it is found guards neglected to evacuate inmates from the building.