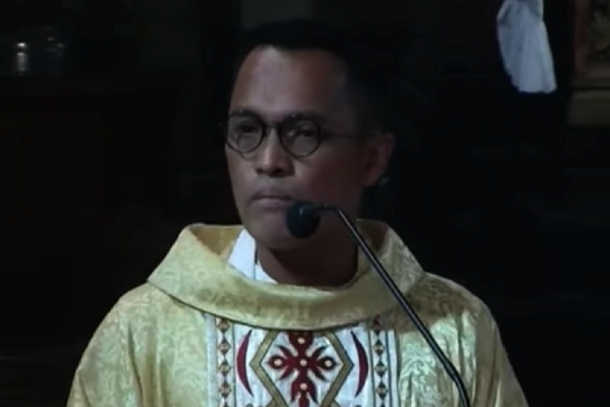 Leading Catholics in Indonesia’s Papua province have been left seething over derogatory comments made about indigenous people by a Jesuit priest during a Christmas Eve sermon.

The comments branded local Papuans as being stupid and primitive, they say.

They have called on the Society of Jesus to severely punish Father Managamtua Hery Berthus Simbolon for remarks which they said “undermined the dignity of the Papuan people.”

The row stems from a sermon he gave at a Christmas Eve Mass at the Jakarta Cathedral Church in which he described his experiences living among Papuans since moving to the province last September.

He described the Papuans as people who “cannot read or count and do not recognize compass directions or know left or right.”

He also alluded to a traditional Papuan dance called tari susu where women dance topless. While laughing, he said he enjoyed seeing their breasts bouncing.

Footage of the 20-minute sermon was posted online and went viral, sparking anger among Papuan Catholics who saw the footage.

"He must be punished so as not to repeat, injure and abuse the dignity of the Papuan people," said Vinsensius Lokobal, chairman of Papua Catholic Lay Scholars Association in a statement on Jan. 7. "We condemn this abusive way of thinking."

Marthen Goo, a Papuan activist, said the priest had hurt all Papuans, particularly at a time when people were recovering from recent unrest caused by racism and discrimination.

He said it was inappropriate for a priest to stereotype Papuans as fools and make fun of them. “The priest was supposed to accept the people and their culture, not make them as laughing stock,” he said.

Criticism of the priest also came from within the Church.

Father Gabriel Ngga, a Franciscan priest who has served in Papua for many years, told ucanews that the sermon was widely discussed among priests and Catholics as well as other religious communities in Papua.

"I felt the sermon undermined Papuans from beginning to end," he said. "It was shallow and completely out of sync with the Christmas message to be brothers to everyone."

Papuan news portal Jubi.co.id reported on Jan. 7 that students at Adhi Luhur High school in Nabire, where the priest was teaching, went on strike calling for his removal.

Responding to calls for the priest to be punished, Father Yohanis Sudriyanto, the school principal, said Father Simbolon had been removed from the school.

Father Simbolon has since apologized for his comments. "I did not intend to hurt anyone, and I did not intend to use the sermon to hurt the feelings of my brothers and sisters in Papua,” he said in an open letter, vowing to be more sensitive to other cultures in future.