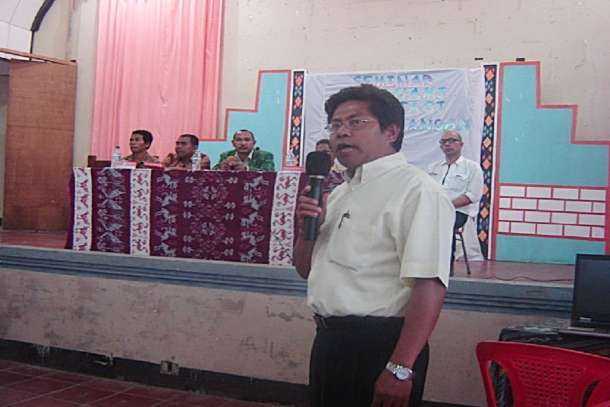 One hot day in 2006, some mothers were busy collecting limestone and manganese at a mining site in Sirise hamlet in East Manggarai district of Indonesia’s East Nusa Tenggara province. They did not wear gloves and only wore dirty face masks.

“I cared about their health. Manganese powder can penetrate the lungs and it has a long-term impact. It was so annoying to see them doing that. I had to help them,” Divine Word Father Simon Suban Tukan says.

It was then that the priest, who was ordained in July 1999, decided to fight against mining activities on Flores, one of four islands covered by the province.

That year he was assigned to Manggarai district’s capital of Ruteng to run the Divine Word Society’s commission for Justice, Peace and Integrity of Creation (JPIC-SVD) after completing his master's degree in law at the state-run University of Gadjah Mada in Yogyakarta province.

He began to regularly visit villagers living close to mining sites to monitor their condition.

In May 2008, he sent two JPIC-SVD staff to mining sites in East Manggarai and West Manggarai districts to conduct field research, the results of which showed that mining activities put the villagers’ lives in danger instead of providing welfare.

“Not long after that, I worked with the Franciscans' JPIC in conducting eight-month field research about mining activities. The results showed that mining activities had many negative impacts on villagers. For example, manganese dust covered the villagers’ vegetable gardens,” Father Tukan says.

The joint field research results made him think seriously that Flores island, which had so many mineral resources, could be damaged if nothing was done.

“So I, along with some priests from the Franciscans' JPIC, began to offer advocacy to villagers living close to mining sites. We also visited religious leaders and government officials as well as writing articles on mining activities and their impacts on people and sent them to the media,” he says.

His efforts bore fruit. In 2009, Ruteng Diocese, which serves East Manggarai, West Manggarai and Manggarai districts, issued a letter showing its rejection of mining activities in the diocesan area.

Supported by the diocese’s stance, Father Tukan worked with the Franciscans' JPIC in conducting follow-up field research in areas with potential mineral resources.

“We often visited villagers and told them about the huge impacts of mining activities on the people’s lives,” he says.

Based on the follow-up field research, mining activities could ruin all social and cultural systems. For example, villagers employed by mining companies had no time to attend social activities as they had to work for hours at mining sites and they were paid between 17,000 and 25,000 rupiahs (US$1.7 and US$2.5) per day.

In 2012, the JPIC-SVD released data showing that there were at least 43 mining permits in East Manggarai, West Manggarai and Manggarai districts.

“That year I joined villagers in a three-day protest against mining activities. We had no other option but to hold the protest,” the priest says.

As time went by, his efforts received international support after he continued to send all information about mining activities on the island to international advocacy organizations.

Yet Father Tukan’s struggle was not easy. In 2014, when he joined villagers in a protest against a manganese mining company in Borong, capital of East Manggarai district, he was dragged by two policemen until he fell and was almost unconscious.

Villagers had battled local authorities since 2009, when a mining permit covering 2,222 hectares of land in Satar Punda village — 10 hectares of which encroached on the villagers’ communal land — was issued without consultation.

Eventually, most mining activities were stopped and other operations were reduced.

“Currently, there are licenses for mining and cement companies covering more than 500 hectares in Lengko Lolok and Luwuk, two villages in East Manggarai district,” he says.

Governor Victor Bungtilu Laiskodat backed the granting of concessions to a mining firm and cement company, although during a meeting with Bishop Siprianus Hormat of Ruteng in June he said he respected the Church’s stance against mining and would look into its objections.

“There have been pros and cons among villagers,” he says.

For Father Tukan, now 50, what he has done so far is just to voice the villagers’ concerns.

“As a priest, I fight for victims of injustice. I fight for their rights. What I have done so far is nothing but to show God’s love to them,” he says.