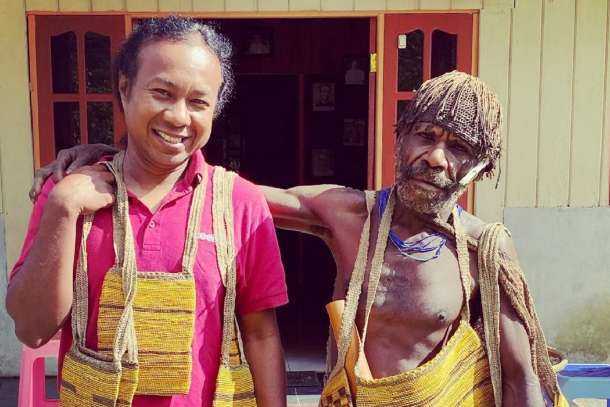 He was still a Jakarta-based Jesuit seminarian assigned to Christ Our Friends Church in Papua’s Nabire district for a pastoral orientation program.

“Soon after I got off the plane, I could see that something was not right. There was a very clear social gap. Papuan people walked barefoot while outsiders rode around in vehicles and wore nice clothes,” he told UCA News.

Spending a year in the parish exposed him to many problems faced by the Papuan people, with poverty, injustice and violence being just some of them.

They were problems he could not easily forget after returning to Yogyakarta province in Java to continue his studies at St. Ignatius College.

“For three years at the college, I could only think of Papua, speak about Papua and read books about Papua,” he said.

Then one day, before being ordained a deacon, the Jesuit provincial suggested he serve the congregation as a diocesan priest in Papua.

“The Papuan people were always in my thoughts. Besides, I like to go hiking, which I did in the mountains and forests while I was there. Maybe the Jesuit provincial was reading my thoughts,” he said.

Finally, in 2012, he returned to Papua after completing his theological studies at the Jesuit-run Sanata Dharma University in Yogyakarta.

Three years later, he was ordained as a priest in Papua’s Timika Diocese.

Father Kira began his missionary work at Our Lady of the Rosary Church in Modio, a village in Papua’s Dogiyai district.

Since then, the only mission of the Flores-born priest, who also studied philosophy at Jakarta’s Driyarkarya School of Philosophy, has been to protect the Papuan people in a changing world.

“Papua is facing a transition. Yet this transition often shows an inhumane face. There is violence, injustice and poverty. To make a humane transition, I try to empower the Papuan people,” he said.

His mission goes hand in hand with the village’s core values and heritage, which embody the history of Catholicism and civilization in the region as well as the richness of natural resources.

“I want to make this area a popular historical site and Marian shrine. It is like Sendangsono Marian Shrine in Yogyakarta province, where the seeds of the Catholic faith in Java were sown,” he said.

Sendangsono Marian Shrine, whose name means a “spring that flows under a tree,” was the baptism site of 171 Javanese people in December 1904. Jesuit Father Franciscus van Lith blessed the spring and used the water for their baptism.

The event is regarded as the birth of Semarang Archdiocese, which includes Yogyakarta province.

“This village is rich in natural resources such as coffee, noken [traditional woven bags made from dried tree bark], peanuts and onion. For now, I focus on coffee,” he said.

Father Kira said he is looking to develop the village through coffee because it has national and international value and because almost all the villagers, who are Christian, are coffee farmers.

“This is where I start. I want to make the coffee in this village famous,” he said.

He buys coffee beans from small farmers and then processes them into instant coffee powder.

He sells the coffee in the main district town and neighboring Nabire district, which involves many hours of travel over rough terrain.

He usually spends a week away during which time he also teaches college students.

“My buyers are mostly policemen and military personnel doing tours of duty in Papua,” he said.

Father Kira has received praise from the Papuan people for his missionary work, including from Yeri Degei from St. Mary Magdalene Mission Station in the village of Putapa.

“He is a priest who wants to serve his people, not to be served. As well as proclaiming the Good News, he helps develop Papuan people’s potential,” he said.

“He may look calm and quiet, but he actually fights against socioeconomic injustices faced by the Papuan people,” he said.

Father Kira, now 40, believes his missionary work has been planned by God.

“It is not my work. It is the work of God. Now I know it is a project of God, I can be calm. No matter how difficult the challenges I face, there will be changes. All I have to do is to be patient,” he said.