This file photo shows the feet of an Indonesian mentally ill man resting while shackled to a wooden bed. Camillian Father Cyrelus Suparman Andi is leading a campaign in Maumere on Flores Island to provide a shackle free environment for mentally ill patients as part of treatment to help them recover. (Photo by Adek Berry/AFP)

For 13 years, Petrus Silvester, 36, spent his days in a rickety small hut behind his family's house, with his legs shackled to wooden beams.

It was the best way his family and neighbors in Maumere, in Indonesia's East Nusa Tenggara province, could think of to prevent him from threatening and attacking people in the street.

Things began to change in March after his mother sought help from Camillian Father Cyrelus Suparman Andi, who teaches biomedical ethics at St. Paul School of Philosophy and Theology also in Maumere, who has developed a reputation for helping mentally ill people.

"According to his mother, he [Silvester] often cried and pleaded to be unshackled," said Father Andi, who is also the formator of Camillian seminarians.

When he and some seminarians paid him a visit, he was in a sorry state dressed only in a piece of cloth.

A few weeks later the Father Andi obliged by building a 12 square meter home for him called a "shackle-free house" equipped with a bed and toilet.

The priest and the Camillians have built 15 such houses for the mentally ill since he launched a campaign to help them in 2015. Each house costs on average US$1,380, which he gets from donors and also from the seminarians' food allowance.

"It's not much, but freeing them from shackles is a service that treats mentally ill people more humanely," he told ucanews.com.

The house gives the family and neighborhood a sense of security, and does not alienate the patients because family members can better care for them, he said. Mentally ill Brazilian was 'not aware' of imminent execution in Indonesia 'They need our attention and love' Camillian Father Cyrelus Suparman Andi cuts the hair of Petrus Silvester, a mentally ill man who had been shackled for 13 years and has gotten better since the priest began helping him. (Photo supplied)

In 2016, the Ministry of Social Affairs set a target of having a shackle free society by next year. But many believe this was a hollow pledge, as nothing seems to have been done to achieve it.

According to the Health Ministry, some 19,845 out of 450,000 people registered as mentally ill in Indonesia were shackled for various reasons, the majority of which were living in rural areas.

According to Father Andi, families are generally forced to shackle their unfortunate relatives because they cannot find other ways to deal with them, particularly when they pose a threat to other people.

Vince, 41 was shackled in 2001 after he tried to strangle one of his neighbors.

"The family tried everything to cure him, and even sold their land to pay for treatment, but he has not recovered," Father Andi said.

A similar story occurred with Once, a 20-year-old girl. Her mother had to follow her wherever she went, but finally gave up by chaining her daughter up.

"Psychiatric hospitals are few and are located far away, which makes families unable to access proper medical care and instead choose to shackle their mentally ill relative," he said.

Most psychiatric hospitals are located in provincial capitals, which doesn't help patients living in remote areas.

Also, he said, there are still many people who believe mental illness is a curse, or karma on the individual or family or the result of witchcraft.

"Hence, there is need to educate people about mental illness and how to treat someone who is mentally ill," he said. 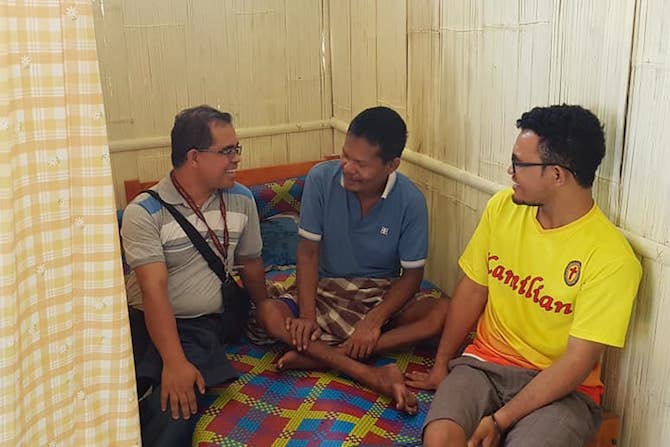 Father Andi (left), and a seminarian (right), right, talk to Vince, a mentally ill man who now lives in a ‘shackle-free house’. He had been shackled from 2001 until the end of September this year. (Photo supplied)

First and foremost a mentally ill person needs to be treated humanely as that can set them on the path to recovery, says Father Andi.

He believes the construction of shackle free houses is one way of doing so.

"In these better surroundings, they are no longer stressed which eventually has a positive impact on decreasing aggressive behavior," he said.

But it must not stop in only providing houses. It must be accompanied by proper medication and other forms of assistance such as regular visits to chat, share stories and pray with them.

"Generally, those who are unshackled are not as aggressive and rude," he said, adding that Silvester is one such example.

"We interact as usual with him, but he can now also work in the fields, which surprised many people in the village," he told ucanews.com.

"They see the change in him as a miracle," he added.

A previously violent Vince has also calmed down. "Now he speaks freely and politely with other people, unlike before," Father Andi said.

"We want to free more and more people from their shackles and also from the mindset that there is no other way of treating the mentally ill but to tether them."