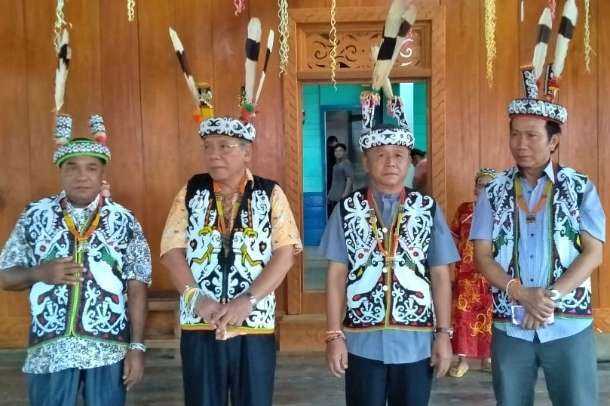 Soon after his ordination in 1994, Father Tadeus Sam Anyeq started to work with the Dayak tribe in East Kalimantan. Twenty-five years later, he has improved the lives of the tribespeople, incorporating their culture and art into the Catholic Church.

His work focuses on cultural preservation by incorporating their songs, music, language and dances into church traditions, while their painting patterns were adopted for church architecture.

The word Dayak comes from Daya, meaning river, and refers to people who traditionally lived along the large riverbanks on Borneo island. Their ancestors were migrants from Yunnan province in southern China who came to Borneo in the 11th century.

Father Anyeq, 55, saw this and was moved to preserve Dayak culture in church liturgy and architecture. He was able to realize this dream when Archbishop Florentinus Sului of Samarinda, a priest of the Congregation of Missionaries of the Holy Family, appointed Father Anyeq parish priest of Good Shepherd Church in Ritan Baru in Kutai Kartanegara district.

“I want to conserve Dayak culture because it is the identity of the people. It’s through a culture that we can understand other people, and how we can offer them pastoral care,” Father Anyeq told UCA News.

The Dayak are among 1,340 tribes in Indonesia and one of the biggest and oldest tribes in Borneo. It has more than 6 million people throughout Indonesia, including over a million who live in East Kalimantan.

The Dayak tribe has six large clans — Apokayan, Ot Danum, Iban, Murut, Klemantan and Punan — but they have the same cultural characteristics in areas such as dance, arts and pottery, and most are farmers.

Tiwah is a ritual where the tribal people pray to their ancestors by carrying the bones of the deceased to a small sacred house for the dead called a sandung, accompanied by dance and music.

Manajah antang is a ritual asking for guidance, particularly on the location of enemies, with the help of an antang (hawk).

Mangkok merah is a ritual that calls for unity of the entire tribe when it is under attack. When the tribe leader sends a red mug, it means that war is imminent and all Dayak people must unite.

Father Anyeq said they also have other rituals such as praying to Puyang Gana (ruler of land) and Raja Juata (the ruler of water) when they open fields or build houses.

They have a traditional house called a betang or long house. It is built of wood and the kitchen is facing the river.

For Father Anyeq, the Dayak culture must be conserved because it has strong values in terms of relations with humans, God and the environment.

“We have to defend our cultural values such as family life, cooperation, solidarity, fraternity and harmony with nature,” said Father Anyeq, the former head of Samarinda Archdiocese's socioeconomic commission.

He said these values are lived and practiced until today — for instance, the rituals when the Dayaks open fields or build houses.

“My task as a priest is to maintain and apply customary norms in people’s daily life, and it is much in line with the spirit of Vatican II,” the priest said.

The Second Vatican Council highlights that the divine reveals itself to people, among others, through cultures.

He said most Dayak people in Kalimantan are Catholics. The reason they chose Catholicism is that their culture was respected and their values were defended. “They converted to Catholicism because they were comfortable and welcomed.”

He said many also follow Islam. They don’t acknowledge themselves as Dayak people but as Malay or Banjar tribes.

Besides Catholicism and Islam, Dayak people are Protestants, Buddhists or follow a traditional belief called Kaharingan.

The conservation effort of the priest has impacted the Church and Dayak Catholics in Samarinda Archdiocese, which has enjoyed many Dayak songs and dances in the liturgy.

Father Anyeq said Dayak Catholics feel proud because their culture was received in the Church.

“I realize it as a mandate of the Second Vatican Council on inculturation that the Church must take root in society and their culture,” he said.

Most churches in the archdiocese have used Dayak art and painting patterns for decorations as well as priest’s clothes such as chasubles and stoles.

Dayak Catholics including youth, he said, more and more love their culture and respond well to his effort. The priest has involved many youths by holding cultural events in villages.

One of the things that makes him proud of Dayak culture is that the people are inclusive and can live side by side with the Chinese, Javanese, Malays and Florenese.

“I thank the priest for helping me and Dayak people know my own culture and identity,” Kedung said.

He hopes Dayak culture will be one of the assets for the Church “so that it can inspire many generations to come.”