It's not just people's souls Franciscan Father Andreas Bisa wants to save, it's the entire planet Franciscan Father Wilibrodus Andreas Bisa gave his flock wanting to receive the sacraments one task — plant trees or grow fruit in gardens or on unused land.

"I call them the sacrament trees," said the parish priest of St. Francis of Assisi Church in Tentang in East Nusa Tenggara province. "I also remind them to become foster parents to the trees so that there is continuous care."

This is one of several efforts the priest introduced to 8,000 parishioners from seven mission stations in Ruteng Diocese as part of his so-called ecology-based transformative pastoral work.

“Every year at each station there are about 100 people who receive the sacraments, which means that five or 10 years later there are thousands of trees growing that can bring economic, social and ecological benefits,” he told UCA News.

The 36-year-old priest, who was ordained in 2013, said that attention to pastoral ecology is important, considering that the majority of his flock are farmers.

Efforts to invite people to care for the environment, said Father Bisa, are also done through cultural channels by cooperating with local leaders.

This is based on his belief that an awareness to care for the environment is already present in the minds of people, which can be seen in the way they interact with nature and through cultural activities.

"There is a cosmological wisdom that shows forests and humans are supporting each other,” he said.

"The forest and its contents are utilized by humans in their daily life, and humans must guard them so that a mutualistic symbiosis is created."

Examples of the close sociocultural relationship between humans and forests, he said, are traditional ceremonies related to forest preservation or offerings after harvest. 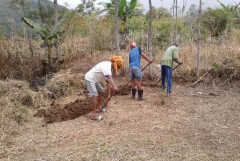 Meanwhile, regarding the commitment not to destroy nature, there are various practices called pemali or things that are prohibited from being done to nature, which primarily aim to control human behavior.

To revitalize such wisdom in activities in the parish, Father Bisa encourages local leaders or elders to talk about local wisdom so that it can be passed on to the younger generation.

"Departing from such wisdom, we then together look for courses of action that can be taken. There is also space for me to integrate the teachings of the Christian faith on the importance of caring for the earth,” he said.

One course of action, he said, is to conduct various traditional ceremonies such as penti or post-harvest thanksgiving combined with conservation activities.

As well as local leaders, Father Bisa tries to work with the local authorities because, according to him, the key to bringing about change is the uniting of religious, local and government figures

In an event to mark World Tree Day on Nov. 21, he initiated conservation activities and signed a memorandum of understanding with the council of Pongnarang, a village nearby, to plant various trees such as fig, banyan, palm and sapodilla.

Similar activities were also carried out on other international ecology-related occasions and celebrated in his parish, including Water Day, World Day to Combat Desertification and Drought, Earth Day, Environment Day and Biodiversity Day. For Father Bisa, his ecological pastoral work is an imperative of faith, which is also inspired by the life of St. Francis Assisi and by Pope Francis, who always emphasizes ecological conservation.

"I feel it is important that the ecological spirituality of St. Francis of Assisi is manifested in what we do," said the priest, who has worked at the Franciscans' Eco-pastoral Centre in Ruteng Diocese for six years.

He also said he appreciated the pope’s encyclical Laudato si', which he said "came at the right moment because an ecological crisis has hit various parts of the world which demands collective action to care for the earth as our common home."

"Awareness of the global crisis must be accompanied by concrete action [to save the planet]. Think globally, act locally. If it doesn't start with us, who else will do it?" he asked.

The priest’s ceaseless efforts have been warmly welcomed.

"The initiatives he introduced awakened us from our sleep. We are encouraged to take concrete steps [to protect nature]," said Yulianus Syukur Diaz, chairman of the parish’s Catholic Youth group.

“Our eyes have been opened to see what can be done to protect the earth. So, it's not just a theory.”

He said young people have been moved by what Father Bisa has done in the parish, such as introducing an ecologically friendly waste management system and looking after plants. "We are deeply impressed,” he said.

Anselmus Pangkur, the Pongnarang village head, said that they had agreed to provide support for Father Bisa, including allocating village funds for the procurement of tree seedlings and other activities.

"We are happy with his efforts, which of course will have a good impact on society and the environment in the future," he said.

For Father Bisa, as a citizen of the earth, people cannot only think about themselves but also other people and the environment.

And this is manifested in three pieties, namely religious, social and ecological piety.

"When these three paths to piety are carried out, salvation, although eschatological in nature, will be felt here on earth," he said.