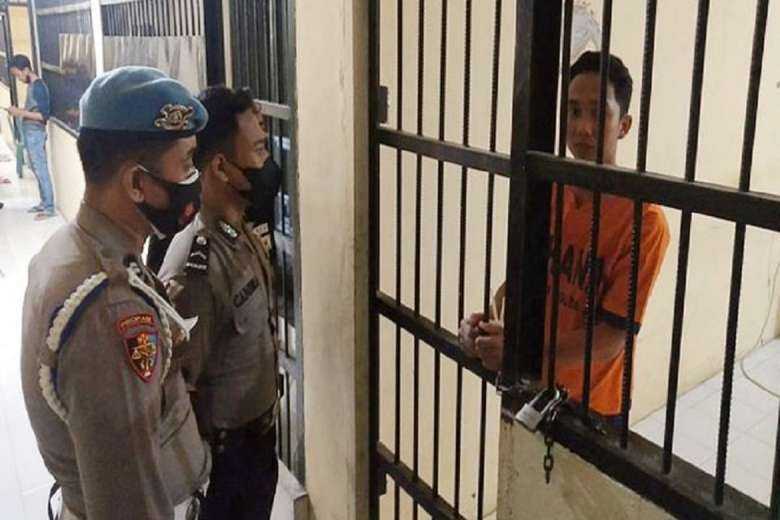 Randy Bagus Hari Sasongko, the Indonesian police officer who allegedly forced his girlfriend to have two abortions, is being detained by police in East Java. (Photo: YouTube)

An Indonesian police officer is facing a jail sentence after being charged with forcing his girlfriend into having two abortions in a case that has sparked public outrage when it emerged she had later taken her own life.

Randy Bagus Hari Sasongko, who serves in East Java province’s Pasuruan district, was arrested this week and charged with intentionally aborting or killing a fetus by forcing his girlfriend Novia Widyasari Rahayu into having two terminations, police spokesman Dedi Prasetyo said on Dec. 7.

He faces a five-year prison sentence if found guilty. He is also likely to be "disrespectfully dismissed" from the police service.

His arrest came after Rahayu, a 23-year-old student, died after taking poison next to her father's grave in Mojokerto district on Dec. 2.

She had previously complained to the National Commission on Violence Against Women (Komnas Perempuan) in August about being mistreated by Sasongko.

"She had been trapped in a cycle of violence at the hands of this man. She became a victim of sexual exploitation and forced abortion," said Siti Aminah Tardi, a commission spokeswoman.

This case has angered Indonesian netizens, with the hashtag #SaveNoviaWidyasari trending on platforms such as Twitter

She said the victim was due to receive counseling but was deeply depressed after being twice refused marriage and told to have abortions by the officer and his family, Tardi said.

In the first abortion, she said, the victim was asked to take drugs and herbs, while in the second abortion the drug was inserted into her vagina, causing Rahayu to bleed.

This case has angered Indonesian netizens, with the hashtag #SaveNoviaWidyasari trending on platforms such as Twitter.

Andy Yentriyani, Komnas Perempuan’s chairwoman, said the sexual exploitation and forced abortions were a form of dating violence, one of the most frequently reported forms of violence to her institution.

She said that the legal process for these violent cases often ends in a dead end in which the victim is blamed. "Meanwhile, the men can just walk away because they are not ensnared by the law," she said.

Sister Maria Yosephina Pahlawati from the Congregation of Servants of the Holy Spirit, who runs an advisory service for female victims of violence on Flores island, said the case should alert all parties to act together.

"One of the important things is the immediate ratification of the draft sexual violence law, which is still stagnating in parliament," she said.