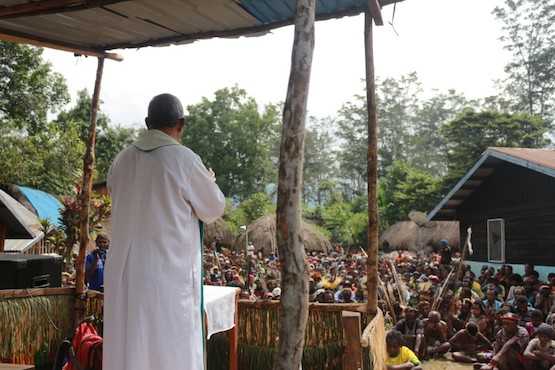 Indonesian police are seeking to question a Catholic priest over possible treason charges for leading a prayer service attended by members of an alleged Papuan separatist group.

Father John Djonga was summoned by police to appear at the station in Wamena on Feb. 19. However, the priest refused to appear, telling ucanews.com that police also needed to contact his superiors at the Jayapura Diocese and that he needed to retain counsel before agreeing to meet with investigators.

Father Djonga led a prayer service on Feb. 15 to inaugurate the office building of the Papuan Customary Council, where a banner of the separatist United Liberation Movement for West Papua was unveiled.

"I came to the program as a priest on behalf of the Catholic Church. I just led the service," he said.

"The council fights for the Papuan people so that they can be free from poverty. It also fights against human rights violations and for other social issues. I prayed for this during the service," he said.

Father Djonga, a noted human rights activist in the province, said he told police to send him a second letter in which diocesan officials also were notified "as I serve the diocese."

He faces up to four months in prison by declining to answer the initial summons.

Father Yulianus Bidau Mote, chairman of the diocese's Commission for the Laity, said Father Djonga's presence at the ceremony was as a priest representing the diocese, therefore police needed to contact the diocese before summoning one of its priests for questioning.

"Don't just send a letter. As an institution, the local police must be able to provide the diocese with notification," he told ucanews.com.

Police said they wanted to interview Father Djonga as a possible witness to an act of treason; it was unclear if the priest was a suspect himself.