Indonesian police have named 69 suspects who allegedly started forest and peat fires in several regions across the country during the first half of this year. Most have been detained and are facing legal action.

Environmentalists, however, criticized the police move, saying they have targeted individuals who in many instances are victims while corporations are left untouched.

Brig. Gen. Awi Setiyono, the spokesman for Indonesian police, told reporters on June 24 that during the period from Jan. 1 to June 21 police had received 64 reports of forest fires.

“About 261 hectares of forest have been burned involving at least 69 individuals,” Setiyono said. “No corporations have been suspects as yet.”

He said the reports were based on police investigations in five provinces — Riau, Central Kalimantan, Aceh, Bangka-Belitung and Jambi. 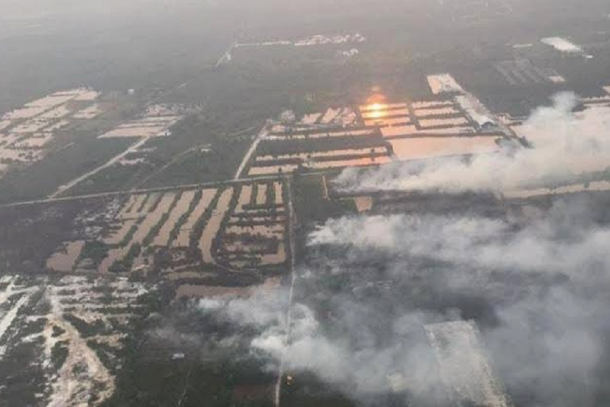 Riau had most cases with 51 involving 50 individuals and a burned area of more than 242 hectares, while 11.5 hectares were burned in Central Kalimantan.

Rico Kurniawan, director of the Indonesian Forum for Environment (WALHI) in Riau province, said that while law enforcement is important to prevent forest and peatland fires, the police has been unfair in determining the actors behind these crimes.

“It’s unfair that marginal people are sacrificed while corporations are protected,” he told UCA News on June 25.

He said most of the land affected by fires in Riau is owned by corporations.

He also called on police to investigate thoroughly before detaining people “because it’s possible they were ordered or paid by landowners or corporations.”

“The police didn’t touch the main cause of the problem. They must also arrest landowners or corporations because they will use the land for palm plantations,” he said.

Based on the 1999 law on forestry, anyone guilty of causing forest fires will be sentenced to five years in prison and pay a fine of about US$110,000.

Frans Sani Lake, director of the Church’s Justice, Peace and Integrity of Creation (JPIC) in Kalimantan, also called on police to find the real masterminds behind forest burning.

“Those [farmers] who burned their fields in order to plant something should not be arrested,” he told UCA News on June 25.

“If the fires were caused by people who are paid by companies, the police must arrest the leaders of those companies.”

President Joko Widodo instructed related ministries and local governments to take pre-emptive measures to prevent forest and peat fires ahead of the dry season that usually reaches its peak from August to October.

“Use technology to monitor hotspots and to provide related information,” he said during a meeting on land and forest fires in Jakarta on June 23.