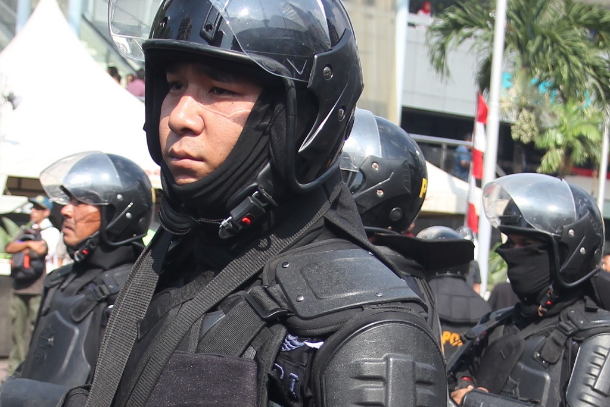 Indonesian anti-terror police say they killed two and arrested 18 other suspected terrorists thought to be behind a Nov. 13 attack on a police HQ in Medan in Indonesia’s North Sumatra province (Photo: Konradus Epa/uanews)

Anti-terrorism police in Indonesia have shot dead two suspected terrorists and arrested 18 more in North Sumatra and Aceh provinces in the wake of a suicide bombing attack on a police headquarters last week.

North Sumatra police chief Insp. Gen. Agus Andrianto told reporters that the two men were killed during a gunfight with the anti-terror squad Densus 88 in the province’s Deli Serdang district on Nov. 16.

He said they were the makers of the bomb detonated by a 24-year-old suicide bomber, identified as Rabbial Muslim Nasution, outside Medan police’s headquarters on Nov. 13.

The blast killed the bomber and injured six others including four policemen.

Andrianto also said 18 alleged terrorists connected to the suicide bombing were arrested, including the bomber’s wife, and were now being interrogated. The international tourist destination has been the scene of two major terrorist attacks. In 2002, two nightclubs in Kuta were hit by suicide bombers and a powerful car bomb in an attack that killed 202 people, mostly foreigners. The second attack in 2005 involved three suicide bombers, claiming 20 lives.

Stanislaus Riyanta, an intelligence analyst from the University of Indonesia, told ucanews that he believed those involved in the Medan attack were affiliated to the Islamic State group.

“It can be seen from their targets and from the type of bomb explosive they used,” he said. “This large terror group is now turning into cells, making them hard to detect.”

He warned of potential threats over Christmas and New Year.