Dreaded terror group is hoping to use the pandemic to launch a comeback, police say 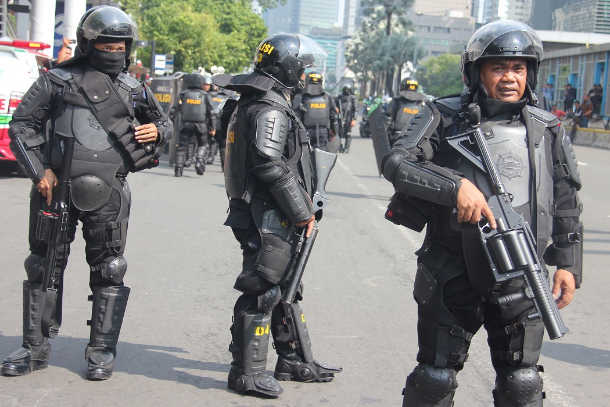 Police stand guard outside a government building amid protests in Jakarta in this file photo. Police have warned of terrorist attacks during the Covid-19 pandemic. (Photo: Konradus Epa/UCA News)

Anti-terrorism squad Densus 88 arrested one man in Tasikmalaya, West Java, on May 12 and two others on May 20, also in West Java, a known hotbed of militancy in Indonesia.

Their arrests follow those of 11 other suspects last year that included the group’s alleged leader, Para Wijayanto, in Bekasi, West Java.

The group is held responsible for a number of deadly attacks in Indonesia from 2000-05, including the Bali bombings that killed 202 people.

Police said on May 23 that the suspected terrorists arrested this month were not Jemaah Islamiyah leaders.

“However, they were seeking to recruit more people in their pursuit to establish an Islamic state,” police spokesman Ahmad Ramadhan said. “The investigation and the search for other suspects is ongoing.”

From January to May this year, Indonesian police have arrested over 60 suspected terrorists from other groups including Jamaah Ansharut Daulah (JAD) and East Indonesia Mujahedeen (MTI)

Stanislaus Riyanta, an intelligence analyst from the University of Indonesia, said Jemaah Islamiyah has about 3,000 members in the country but has been quiet since the death of al-Qaeda chief Osama bin Laden in 2011.

“Activities picked up again after the Islamic State group was defeated in the Middle East,” he told UCA News.

He said the Covid-19 pandemic is an opportune moment for the group to reawaken.

Riyanta said terrorist groups want to use Covid-19 to gain momentum as security forces concentrate on fighting the pandemic. He said they will want to recruit people unhappy with the present situation and turn them against the government.