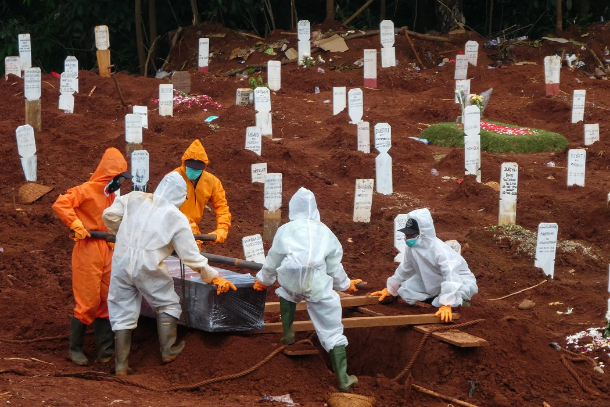 Workers move a coffin of a Covid-19 victim to a burial site at a cemetery in Jakarta on April 15. (Photo: Bay Ismoyo/AFP)

Indonesian police have warned of jail terms for people who try to prevent Covid-19 patients from being afforded a decent burial following protests against the funerals of several victims.

Many people believe they can contract the deadly virus from corpses during or just after funerals or from those conducting burials.

Police spokesman Brig. Gen. Argo Yuwono told journalists on April 13 that coronavirus victims “were our brothers and sisters” and “their burials were conducted according to existing protocols.”

Yuwono was speaking at a press conference in Jakarta that was livestreamed amid tighter social distancing restrictions.

He said the protocols followed safety standards set out by the World Health Organization. This included spraying disinfectant on the corpse, washing the body, covering it in plastic and putting it inside a coffin for burial by hospital authorities.

Those carrying out a burial are also obliged to wear personal protective equipment such as gloves, masks and coveralls.

“We must never reject [Covid-19 patient burials]. Why? Because if we do, there will be legal consequences,” Yuwono said.

He pointed to protests against the burial of a nurse who died from Covid-19 in Central Java province’s Semarang district last week.

The nurse, who worked at a local government-run hospital, was to be laid to rest in a cemetery next to her father as per her family’s request. However, dozens of villagers blockaded the road to the cemetery, forcing the nurse’s body to be buried in a large municipal cemetery instead.

“We have apprehended three people [regarding the protest],” Yuwono said, adding that they were charged under the Criminal Code and the 1984 Law on Infectious Diseases. The three could face seven years in prison, according to Central Java police.

Three other people were charged in nearby Banyumas district in a similar case.

In a statement, a copy of which was received by UCA News, six professional organizations including the IDI and PPNI said the protests were abhorrent.

“Such actions should not take place particularly against medical workers who risked their lives for humanity,” the statement said. “There is no reason to reject or to stigmatize our colleagues who died as heroes of humanity.”

Felix Gunawan, a doctor and chairman of the Jakarta-based Catholic Association of Indonesian Health Services, said such attitudes exist because many people lack understanding of Covid-19 burial protocols.

“There will be no transmission if the protocols are followed,” he told UCA News. “All hospitals have followed the protocols. People must believe it.”