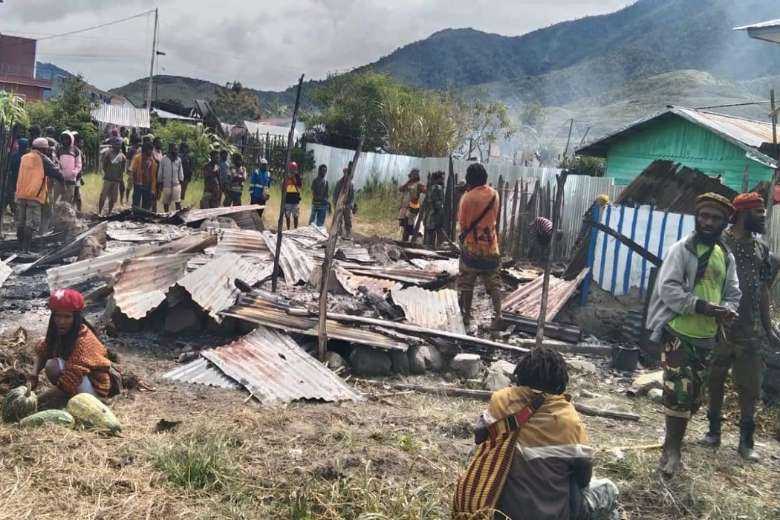 The gutted office of the West Papua National Committee (KNPB) in Dogiyai district, Papua province, on May 23. (Photo supplied)

Church activists in Indonesia are calling for a transparent investigation into a series of arson attacks targeting homes and other buildings in Papua province.

The attacks began when residents in predominantly Catholic Dogiyai district rejected plans to build a new police station, leading them to suspect the attacks could have been carried out by security forces.

Father Bernard Baru, chairman of the Augustinian Order of the Justice and Peace Commission in Papua, said police must reveal the mastermind and motive for the attacks that have destroyed various properties.

"The police must move quickly to investigate this case. It is urgent to eliminate suspicion among the various parties," he told UCA News on May 25. "The investigation must be carried out in a transparent manner where the results are made public."

The arson attacks began on May 3, with several taking place on the night of May 22 and the early hours of May 23.

On May 22 at 10pm, a fire was reported at a house next to a police station in Moanemani, the district capital.

A UCA News source said gunshots were heard and members of the security forces were reported to have thrown bullets onto the roofs of other residents' homes, triggering clashes between them and youths that saw a 23-year-old shot and wounded.

A few hours later, on May 23 at 2.30am. a fire engulfed a motorcycle repair shop, then at 3am a fire broke out at another house before a blaze was reported at 4am at the office of the West Papua National Committee (KNPB), a pro-independence organization.

Police said they are still trying to figure out the causes of the fires.

Meanwhile, Papuan police chief Mathius D. Fakhiri said on May 23 that additional officers had been deployed to the area to "take firm steps" to get to the bottom of the matter.

Father Baru said the spate of incidents raised many questions. "It's a bit hard to understand why police haven't found the culprit yet despite them having happened since the beginning of the month and one of the fires being near their station," he said.

Benny Goo, a Catholic activist, said residents suspect everything was related to their opposition to a plan to open another police station in the district, which he claimed was part of the heavy-handed approach to unrest Indonesia applies in Papua.

“It’s thought the arson is a coordinated campaign to be used as an excuse to open a new station,” he told UCA News.

Police have been silent about how their investigations have been going, Goo said.

Claims that the perpetrators were local groups are questioned considering that the targets included the homes of indigenous Papuans and the KNPB office, he added.