Indonesian Muslim cleric Rizieq Shihab (center) is surrounded by his supporters on arrival at police headquarters in Jakarta on Dec. 12. (Photo: Dasril Roszandi/AFP)

Shihab is accused of organizing large gatherings in defiance of warnings by authorities to observe social distancing rules.

They included an event to mark the Prophet Muhammad’s birthday and his daughter’s wedding, which attracted about 10,000 of his supporters. Many people who attended these events later tested positive for Covid-19.

The police had called Shihab in twice for questioning but he went into hiding, leading to a manhunt during which six of his supporters were reportedly shot dead during a shootout with police.

He surrendered to Jakarta police on Dec. 12 and was detained after being questioned for 12 hours.

Police also charged him with inciting hatred against the government, which carries a possible jail term of at least six years in prison.

“He will be detained in Jakarta police jail for 20 days for further investigation,” police spokesman Argo Yuwono told reporters. “He is being detained so that he doesn’t flee the country again or intimidate witnesses.”

The firebrand cleric, whose Islamic Defenders Front (FPI) group is known for violence and persecuting religious minorities, recently returned from self-imposed exile in Saudi Arabia after fleeing pornography charges that were later dropped.

Petrus Selestinus, a Catholic lawyer and head of a lawyers’ association to defend Indonesia’s secular system, welcomed Shihab’s detention. “Investigators have good reason to detain as he is quite definitely a flight risk,” he said.

Stanislaus Riyanta, an intelligence analyst from the University of Indonesia, said his arrest is a good opportunity for the authorities to clamp down on the intolerance he and his group espouse. 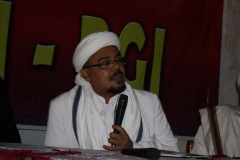 “Intolerance and hate speech are the seeds of radicalism. By enforcing the law, Indonesian police will send out a message that this has no place in Indonesia,” he said.

“The police must be firm and protect all people from certain groups that use violence to achieve their goals.”