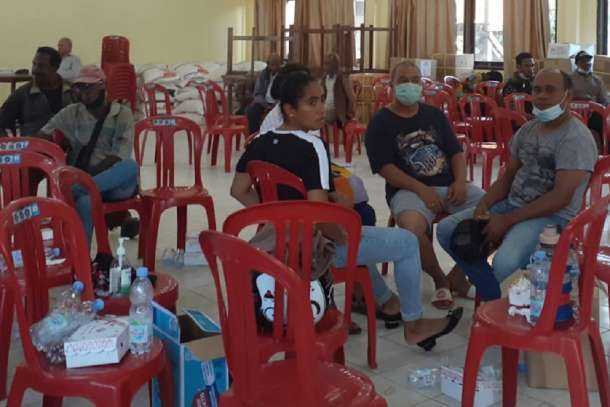 Some of those arrested by police on Nov. 17 are seen here waiting to be questioned by Merauke police. (Photo supplied)

Indonesian police in Papua have come under fire from a prominent rights group after arresting 55 Papuans who were about to hold a meeting in a church-owned building in the city of Merauke.

The arrests were another example of state oppression against Papuan people pursuing their right to freedom of expression, Amnesty International said.

Two of those arrested were members of the Papuan People's Assembly, an official institution formed by the government to act as a forum to inform authorities about issues concerning indigenous Papuans.

Wensislaus Fatubun, an adviser of the assembly, said those arrested were rounded up in a hotel, handcuffed and led away on Nov. 17 before being released the next day.

Fatubun said the meeting, due to be held at a hall owned by Merauke Cathedral Parish on Nov. 17-18, was to discuss Papua’s special autonomy status that will end this year.

Special autonomy status was granted to Indonesia’s easternmost provinces by former president Megawati Soekarnoputri to guarantee Papuans the right to manage their own region politically, economically and culturally.

Fatubun said he saw no reason for the arrest as the participants had permission from the church to use its building and what they were going to discuss did not involve breaking any laws.

However, Merauke police chief Untung Sangaji said they were arrested because police had evidence "that treason would be committed."

One of the pamphlets prepared for the meeting contained comments regarding the right to self-determination for indigenous Papuans, he said.

Fatubun said he had to explain to police that they needed to understand the term "self-determination" better as it does not necessarily mean independence. It is also linked to human rights, he added.

Usman Hamid, executive director of Amnesty International Indonesia, condemned the arrests, saying it was a blatant infringement on the Papuan people’s right to freedom of expression, assembly and association.

"Arresting them arbitrarily was very discriminatory since freedom of association for other groups is guaranteed," he said in a statement. “Accusing them of treason for trying to express their opinion peacefully is a human rights violation.”

He said the Papuan People's Assembly represents the Papuan people and has the right to request and express the views of Papuans about the implementation of the government’s special autonomy policy.

"The government and law enforcement officials should guarantee and protect these rights, not take repressive actions that further erode freedom of expression," he said.

Such actions will continue for as long as the treason articles in the Indonesian Criminal Code are applied outside the provisions permitted in international human rights law, he added.