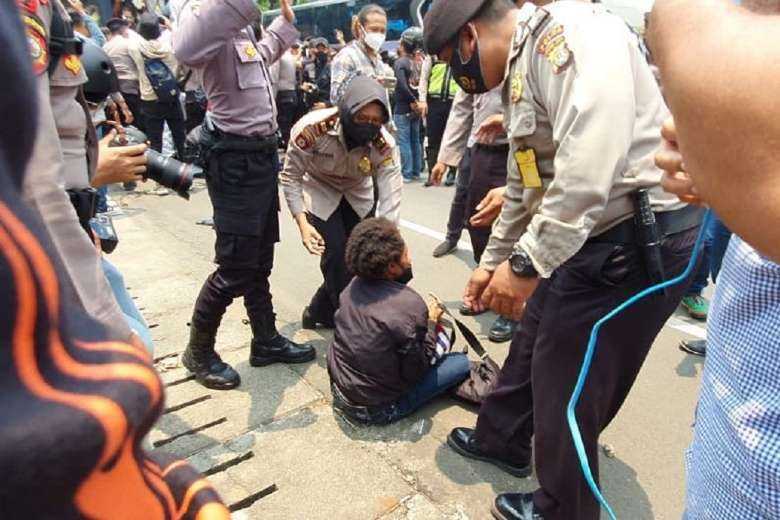 Police arrest a female protester outside the United States embassy in Jakarta on Sept. 30. (Photo supplied)

Indonesian police arrested 17 indigenous Papuan students and activists during a protest outside the US embassy in Jakarta.

The 13 men and four women were among dozens of people protesting on Sept. 30 to mark the 59th anniversary of the Rome Agreement, which they say deprived Papua of its independence following the end of Dutch colonial rule.

The United Nations-backed agreement, provisionally signed by the Netherlands, Indonesia and the United States in New York in August 1962, was confirmed on Sept. 30 that same year during another ceremony in Rome.

It transferred authority over West Papua from the Netherlands to Indonesia but included a guarantee that Papuans would be granted an “action of free choice” (referendum) to determine their political status.

According to protesters, the agreement was immediately broken by Indonesia as it claimed West Papua was part of its territory, which was not what the agreement had stated.

It was a peaceful demonstration which should have been respected.

"Emergency restrictions are still in place to prevent Covid-19 transmission, so mass activities are banned including demonstrations in public places," he said on Sept. 30.

Reports said the 17 were later released on Oct. 1 after questioning.

Ambrosius Mulait, a protester who avoided being arrested, said the 17 were manhandled and bundled into a van as soon as they arrived in front of the embassy.

"We hadn’t even begun the protest but police forced the other protesters into the van," he told UCA News.

He also claimed tear gas was used and several protesters were beaten.

Several rights groups also accused police of adopting a heavy-handed approach, saying “the use of violence violates the law, and human rights, and shows a racist and discriminative mindset.”

Usman Hamid, executive director of Amnesty International Indonesia, said the use of force was unnecessary.

“It was a peaceful demonstration which should have been respected,” Hamid told UCA News.