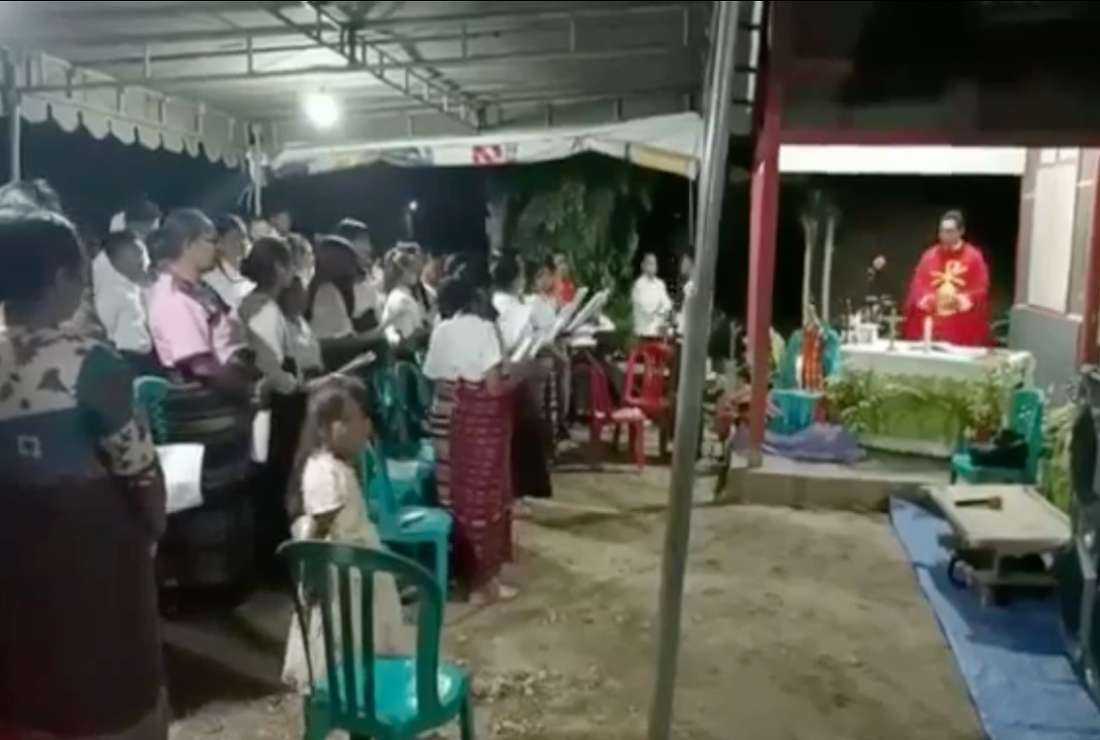 Screenshot from the video showing the choir at St. Francis of Assisi parish in Lamahora, Larantuka diocese, East Nusa Tenggara singing pop songs during the Mass, which drew condemnation from Catholics. (Photo: Facebook)

A parish in Indonesia has issued an apology after a video in which the choir sang pop songs during Mass sparked widespread condemnation from Catholics.

In a statement, St. Francis of Assisi Parish in Lamahora, Larantuka diocese, East Nusa Tenggara said the context of the Mass was the inauguration of the caretaker of young Catholics and "there was no intention whatsoever, neither by the priest who led the Mass nor the young Catholics to harm the Eucharist celebration. We apologize to those who felt disturbed, hurt or harmed by the songs sung at the Mass."

Redemptorist Father Asterius Jangu Ate, the parish priest, signed the statement published on Aug. 6, in addition to the chairman of the parish council, the head of Catholic youth and the assistant priest.

In the video that went viral on social media over the past week, the choir sings popular songs in lieu of the liturgical song. One of them is Cinta Luar Biasa (Extraordinary Love) by Andmesh Kamaleng which describes the extraordinary love of a man for his lover, which was used as an offering song.

Catholics took to social media to protest, questioning the priest who led the Mass for allowing such songs.

The parish stated that the priest had actually intended to directly reprimand the choir members while singing but avoided it so as not to disturb the Mass and only delivered it after it was over.

The parish also said that the video was no longer distributed for other purposes.

"We are deeply sorry for this unexpected incident. This is a valuable lesson for us to pay more attention to the selection of songs in the Eucharistic celebration,” the parish said.

Carmelite Father Yanto Yohanes Ndona, a liturgical master's graduate from San Beda University in the Philippines who often writes popular articles related to the liturgy, said this case should encourage Catholics to introspect on "the extent to which catechesis and efforts to provide understanding to lay people and also the priest about the meaning of the liturgy and the liturgical songs are already in progress.”

"Every one of us as Catholics must have an awareness that the liturgy and liturgical songs are a spiritual wealth that must be preserved and not arbitrarily replaced with secular things that are not in place," he said.

He added that what the choir did at the Mass was certainly "not with the aim of destroying the liturgy, but rather because of a lack of understanding and lack of proper catechesis on the liturgy."